Yoga and Aquatic Exercises can Improve the Symptoms of Multiple Sclerosis

Multiple sclerosis (MS) is a chronic progressive auto-immune disease in which the body's own immune system attacks the nervous tissue, potentially resulting in movement disorders. Other typical symptoms of MS include physical and mental fatigue as well as faintness, depression and paresthesia such as pins and needles, itchiness and numbness.

Exercise can have a positive influence on certain symptoms of multiple sclerosis. Patients who do yoga and aquatic exercise suffer less from fatigue, depression and paresthesia, as reported by researchers from the University of Basel and the Psychiatric University Clinics Basel in a joint study with colleagues in Iran.

Yoga and Aquatic Exercises can Improve the Symptoms of Multiple Sclerosis


In a random trial, researchers from Basel and Kermanshah (Iran) have now shown that these symptoms significantly improved after an eight-week program of yoga and aquatic exercise. In comparison to the control group, fatigue, depression and paresthesia were significantly reduced in patients who took part in a three-times weekly training program. In the non-exercising group, the likelihood of moderate to severe depression was 35-fold higher than in the groups who had done yoga or aquatic exercise.


‘Exercise can have a positive influence on certain symptoms of multiple sclerosis. Patients who do yoga and aquatic exercise suffer less from fatigue, depression and paresthesia.’


Fifty-four women with MS and an average age of 34 years were assigned to one of three groups: yoga, aquatic exercise or no exercise. Before and after the trial, patients were asked to complete a questionnaire about their symptoms. All patients continued with their existing treatment, including any medication taken to regulate the immune system.

"Exercise training programs should be considered in the future as possible complements to standard MS treatments," write the researchers. Researchers from the Kermanshah University of Medical Sciences in Iran, the Psychiatric University Clinics (UPK Basel, Center for Affective, Stress and Sleep Disorders) and the University of Basel's Department of Sport, Exercise and Health took part in the study. 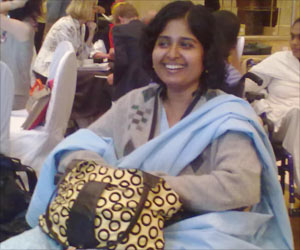 Multiple Sclerosis  Living Many Lives in One Lifetime
Thirty-five-year-old disability rights activist Smitha Sadasivan has been battling Multiple Sclerosis with an active professional life for over 15 years.
READ MORE

Multiple Sclerosis is a Tough Disease to Manage but It is Not Impossible
On World MS Day, a cheerful 37-year-old single mom in India recounts her personal journey of living with Multiple Sclerosis.
READ MORE