Yet Another Viewpoint - on Obesity 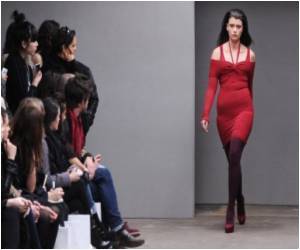 Britain's increasing problem of obesity would only worsen if size zero models are rejected in favor of larger ones, warn researchers Dragone and Savorelli from the University of Bologna, Italy.

The National Health Service in Britain has been taxed with the rising expenditure on obesity that stands now at £4.2 billion and this is expected to double by 2050. The researchers claim that, in the face of this situation, to promote larger models, would de-motivate people to lose weight.

Dr Davide Dragone and Dr Luca Savorelli in their paper Thinness and Obesity: A Model of Food Consumption, Health Concerns, and Social Pressure warn, "...health is on average reduced, since people depart even further from their healthy weight. Given that in the US and in Europe people are on average overweight, we conclude that these policies, even when are welfare improving, may foster the obesity epidemic."


Although those with eating disorders would be helped to change their perception by using larger models, the problem facing the country right now is obesity, and skinny models would act as an incentive to people who need to seriously think about losing weight.

Slide show which explains obesity causes and tips on how to lose weight. Exercising before breakfast is most effective for weight loss.
Advertisement
Of course, this viewpoint is in direct contradiction to what experts have been recommending to counter the rise of anorexia cases in England over the last ten years. Unrealistic expectations that idealizing underweight models encourage, can lead to low self-esteem, anxiety and serious mental health problems such as depression, according to Simon Lawton-Smith from the Mental Health Foundation.

On the other hand, Dr Dragone and Dr Savorelli state, "To promote chubby fashion models when obesity is one of the major problems of industrialised countries seems to be a paradox."

Others have joined this debate, the matter even reaching the House of Lords where Lord Campbell-Savours, an advocate of health reform, criticized 'the political incorrectness which is reflected in how the media and the industry treat the subject.'

It remains to be seen how Britain responds to these different viewpoints in tackling its seriously divergent weight issues.

Blood Donation - Recipients The Essence of Yoga Indian Medical Journals Find a Doctor Noscaphene (Noscapine) Blood - Sugar Chart Vent Forte (Theophylline) Selfie Addiction Calculator Sinopril (2mg) (Lacidipine) Calculate Ideal Weight for Infants
This site uses cookies to deliver our services. By using our site, you acknowledge that you have read and understand our Cookie Policy, Privacy Policy, and our Terms of Use

Yet Another Viewpoint - on Obesity Personalised Printable Document (PDF)