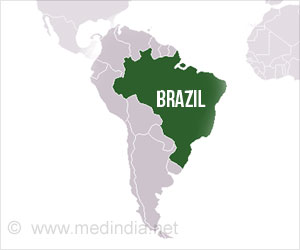 Scientists have discovered the origin of the virus that is responsible for the ongoing yellow fever epidemic in Brazil, the worst for 40 years. The findings of the study are published in Scientific Reports.

By means of a molecular study of yellow fever viruses found in dead monkeys and in mosquitoes, the group discovered that the strain behind the current epidemic originated in Pará State in North Brazil in 1980.

Yellow fever is a hemorrhagic fever that is transmitted by infected mosquitoes and it can lead to liver failure and death.
Advertisement
‘Yellow fever is an acute disease that occurs in monkeys and humans caused by a virus that spreads through the bites of infected mosquitoes. Jaundice, yellowish or greenish pigmentation of the skin and whites of the eyes due to high bilirubin levels and liver damage are the symptoms of yellow fever.’

The virus infected monkeys in Pará and spread from there throughout the Amazon region until it reached Venezuela and Suriname. From 2000 on, always via infection of monkeys, the disease migrated to the Center-West and Southeast of Brazil, finally reaching São Paulo State in 2013. The first deaths of humans in São Paulo occurred in 2016.

Mosquito-borne diseases, like malaria, filaria, dengue, etc are common in places conducive of mosquito breeding. Swamps, ponds and stagnated drainage provide optimal breeding ground for mosquitoes.
Advertisement
Since mid-2016, when the ongoing yellow fever epidemic began, 2,245 cases of the disease have been confirmed, with 764 deaths, according to the Health Ministry. The largest number of cases since 1980, when the government made notification mandatory, had previously been reported in 2000. In that year, 40 people died from yellow fever.

Another face of the problem is the infection of monkeys by the same mosquitoes that transmit the virus to humans. Since 2016, public health authorities responsible for epidemiological surveillance in the Center-West, Southeast and South, where the epidemic is concentrated, have collected the carcasses of more than 10,000 monkeys found in forests and parks, mainly howler monkeys (Alouatta spp.), marmosets (Callithrix spp.) and capuchins (Sapajus spp). Yellow fever virus was detected in 3,403, according to the Health Ministry (Boletim Epidemiológico de Febre Amarela).

"More than 90% of the dead monkeys are believed to be Alouatta guariba. The species is extremely susceptible to yellow fever," said Ester Sabino, Director of IMT-USP.

"Troops of more than 80 monkeys were entirely destroyed," Cunha said, referring to the deaths of howler monkeys from yellow fever in Horto Florestal, a nature reserve in the north of São Paulo City in late 2017.

Yellow fever is an acute disease caused by a virus transmitted to monkeys and humans through the bites of infected mosquitoes. The symptoms include jaundice, a yellowish or greenish pigmentation of the skin and whites of the eyes due to high bilirubin levels, reflecting liver damage.

In the sylvatic (wild) transmission cycle, the yellow fever virus circulates between mosquitoes of the genera Haemagogus and Sabethes and monkeys. Humans are considered incidental hosts in the sense that people are infected only if they happen to live or work in tropical forests or travel on land through such areas. In the urban transmission cycle, the virus is transmitted to humans (the main host in this case) by the mosquito Aedes aegypti.

Yellow fever was endemic in the South and Southeast of Brazil in the early twentieth century. Urban transmission has been eradicated thanks to vaccination and action against A. aegypti breeding sites.

In the last two decades, transmission to humans has occurred outside the Amazon region, where yellow fever is still endemic. Cases have been reported in humans and monkeys in Bahia, Goiás, Minas Gerais, São Paulo, Paraná and Rio Grande do Sul.

Since late 2016, the disease has spread faster and farther, reaching the Atlantic Rainforest biome, with all its extraordinary biodiversity, which includes many species of monkey. Yellow fever had not occurred in these areas for decades.

In search of the yellow fever virus, Cunha and her group investigated samples of brain, liver and spleen tissue from dead monkeys found by state public health workers and compulsorily sent for analysis to IAL, the state reference laboratory. Samples from 430 dead monkeys were tested between July 2016 and March 2017. Most were Alouatta, Callithrix and Sapajus, but there were some specimens of Black-fronted titi (Callicebus nigrifrons) and Golden lion tamarin (Leontopithecus rosalia), an endangered species.

Investigation in search of the yellow fever virus was carried out in each one of the species. The published study contributes to a better understanding of the biotic pathways involved in the virus's spread from the Amazon to the Southeast. "The study describes the evolution of the virus in different species. The disease is milder in capuchins than in howler monkeys and marmosets," Sabino said.

Not all the dead monkeys sent to IAL died from yellow fever. "Some had been run over and others electrocuted, for example," Cunha said. "The protocol requires analysis by the reference lab of tissue samples from all dead monkeys found, whatever the circumstances."

The presence of the virus was ruled out in most cases, and even in the minority in which it was confirmed, it was not always possible to be sure that death was due to yellow fever. The disease is practically a death sentence for howler monkeys. Marmosets are susceptible but do not always die. Capuchins are considered resistant.

By mid-2017, the epidemic that began in the north of São Paulo State in 2016 had spread to the Campinas region, not far from the state capital. "Yellow fever virus hadn't circulated in Campinas since the early twentieth century," Cunha said.

The first infected monkey was confirmed by IAL in July 2016. It was a capuchin from the Ribeirão Preto region. The species is resistant, so the cause of death was not reported as having been caused by yellow fever, although the virus was found in its tissue.

"The animal came into contact with the pathogen via a mosquito bite but died from other causes. We wanted to find out if capuchins were acting as natural reservoirs of the virus precisely because they're resistant," Cunha said.

Yellow fever virus was found in 67 out of the 430 samples analyzed by Cunha and colleagues at IMT-USP; 30 were from howler monkeys, nine from marmosets, and seven from capuchins. The rest were from monkeys of unidentified genera.

"In these 21 cases, the material didn't indicate the genus, but we suspect they were Alouatta owing to the high viral loads in the tissues analyzed," Cunha said.

The researchers isolated the virus from each of the 67 confirmed samples, sequenced the genomes, and compared the genomes with those (available online) of viruses from the outbreaks of yellow fever that occurred between 1980 and 2015 in Brazil and neighboring countries.

They discovered that the strain responsible for the current epidemic originated in Venezuela and in Roraima State and Pará State in Brazil. This is in line with prior research suggesting that the 2016-17 epidemic began in the North region and spread to the Southeast by means of a long and continuous sylvatic cycle involving mosquitoes and monkeys.

The results of the study reveal an evolutionary journey of sizable proportions in both time and space. In 1980, yellow fever virus was endemic in Pará. In 2000, it reached Mato Grosso do Sul, Goiás and Minas Gerais in the Center-West. By 2004, it had crossed into Venezuela, and by 2009, it had reached Trinidad and Tobago in the Caribbean. In 2010, it was present in Roraima in the far North, while one strain was found in Rio Grande do Sul in the far South. The virus arrived in São Paulo State in 2013.

The molecular analyses performed by Cunha and colleagues showed that the virus was fully disseminated in most Brazilian states and in Suriname by 2017.

Other researchers at IAL and IMT-USP are now conducting similar studies involving the dead monkeys collected in São Paulo State during the second wave of the epidemic, in July 2017-June 2018, and during the third wave, which began in July 2018 and will fizzle out this year with the end of the rainy season and the advent of winter, when the mosquitoes practically stop reproducing.

Depending on the results of these forthcoming studies, it may be possible to determine whether the current epidemic in São Paulo State is on the wane. Alternatively, despite mass vaccination the virus could still be spreading through the monkey population and fresh outbreaks may be in the offing.

Zika virus is transmitted to humans by infected mosquitoes which causes mild fever with maculopapular rash. No treatment or vaccine is currently available.
Advertisement
<< Watch Out: Stomach Cancer No Longer Just a Disease of the Ol...
Central Team Rushed to Assam After 21 Deaths Due to Japanese... >>

Vector-borne diseases are infectious diseases or illness transmitted through insects such as mosquitoes, sandflies, ticks, and bugs. Vectors can be either biological carriers or mechanical carriers.