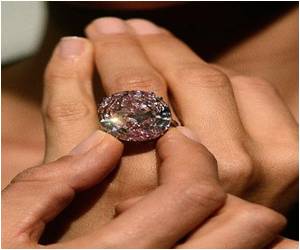 An auction in Geneva on Tuesday recorded a sale of a 100 carat yellow diamond for 14.5 million Swiss francs (16.3 million,11.9 million euros).

The 110.09 carat diamond went unsold at first, with the bids too low, before the Sotheby's auctioneer unexpectedly announced that the diamond was going back under the hammer, explaining that there had earlier been some confusion over the currency displayed.

Rare Orange Diamond to be Auctioned in Geneva

A beautiful and extremely rare orange diamond to be auctioned in Geneva and auctioneers believe it could fetch at least $20 million.
Advertisement

The sole bidder was a woman in the auction room who bought it for 14.5 million Swiss francs, which the auctioneer described as "a very good price".

The Graff Vivid Diamond is one of the largest yellow diamonds in the world, it's colour is given as "daffodil yellow."

Another highlight of the Geneva spring auction season will be Wednesday's sale by Christie's of "The Blue" a spectacular 13.22 carat diamond estimated to go for $21-25 million.

Sotheby's showed off a 59.6-carat pink diamond that will be auctioned in the Swiss city of Geneva at a record asking price of $60 million (49 million euros) in November.
Advertisement
<< Patients in Need of Vaccine Against Shingles Don't Get It
'Forgive and Forget' Theory Really Works! >>