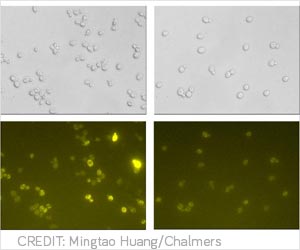 Yeast, a good source of protein aids in producing more efficient yeast-based protein therapies for diseases like cancer and the complex metabolism of yeast has been discovered, reveals a new study.

It took several years, but a research team headed by Professor Jens Nielsen at Chalmers University of Technology has finally succeeded in mapping out the complex metabolism of yeast cells.

Advertisement
‘Identification of the yeast cell mechanism makes the process more efficient and aids in treating diseases like cancer.’

The breakthrough was recently published in an article in Nature Communications. The market for pharmaceuticals that mimic the body's own proteins - protein-based therapeutics is exploding. Some of them are relatively simple to manufacture in yeast-based cell factories. Insulin and HPV vaccine are two examples that are already under production, but other therapies, such as antibodies to various forms of cancer, are significantly more difficult to manufacture.


"They are currently produced using a cell factory based on a single cell from a Chinese hamster. It's an extremely expensive process. If we can get yeast cells to do the same thing, it will be significantly cheaper, perhaps 10 percent of what it costs today. Our vision is to eventually be able to mass-produce and supply the entire world with therapies that are too expensive for many countries today," says Jens Nielsen, professor of systems biology.
Advertisement
In collaboration with Associate Professor Dina Petrovic and Mathias Uhlén's research team at the Royal Institute of Technology in Stockholm, Jens Nielsen has been mapping out the complex metabolism of yeast cells for four years.

"We've been studying the metabolism of a yeast that we already know is a good protein producer. And we found the mechanisms that can be used to make the process even more efficient. The next step is to prove that we can actually produce antibodies in such quantities that costs are reduced."

The discussion has mainly been about cancer, but there are many other diseases, for example Alzheimer's, diabetes and MS, that could potentially be treated by yeast-based protein therapies.

How distant a future are we talking about? "Our part of the process is fast, but pharmaceuticals always take a long time to develop. It could be a possibility in five years, but should absolutely be on the market in ten," Nielsen says.

Jens Nielsen has been making headlines the past few months. In addition to his publication in Nature Communications, he has recently received three prestigious awards.

On 31 October he received the world's biggest award for innovation in alternative fuels for transportation - the Eric and Sheila Samson Prime Minister's Prize, in Israel. Alternative fuels? Yes, plain old yeast can be used for a lot, and Nielsen's award was for his contribution to processes for producing hydrocarbons from yeast, which will advance new biofuels.

Earlier in October he received the prestigious Energy Frontiers Award from the Italian oil company Eni for the same type of research. And just a week before he left for Israel, he was awarded the Royal Swedish Academy of Engineering Sciences (IVA)'s gold medal for innovative and creative research in systems biology.

"Yeast is a superb modelling system. Almost everything in yeast is also found in humans. We have complete computer models of the metabolism of yeast, and we use the same type of models to study human metabolism," Nielsen explained when he received the IVA award.

More about making the metabolism in yeast more effective

The protein production of yeast cells comprises more than 100 different processes in which proteins are modified and transported out of the cell. Around 200 enzymes are involved, which makes it a very complex system to engineer.

In order to optimize protein production, it is necessary to chart how these 200 enzymes function and work. In the study, this has been done by altering the genetic set of certain key genes, using advanced screening methods in combination with modern genome sequencing techniques.

Pasteurization of Milk
Encyclopedia section of medindia gives a briefs account about Louis Pasteur - The Father Of ......