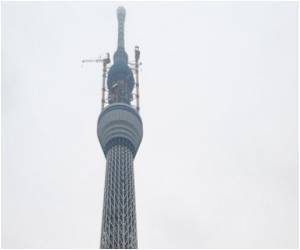 Construction on the Sky Tree, also the world's tallest free-standing television tower, had continued despite the 9.0 quake that devastated the country's northeast last week and strongly shook Tokyo.

Japan can boast the world's tallest free-standing television tower as of Tuesday, when the under-construction Tokyo Sky Tree rose to a height of 601 metres (1,971 feet).
Advertisement

"We've cancelled a ceremony in consideration of people affected by the disaster," a spokesman for the tower's operator said.


"We would have staged a simple event with mascot characters as we did when it reached 600 metres."

The quake, followed by aftershocks and monster tsunami waves, ravaged the Pacific coast northeast of Tokyo on March 11, violently swaying buildings in the teeming capital city as well.

World's Tallest Building to be Inaugurated in Dubai

Once-bustling Dubai will open the world's tallest skyscraper on Monday, boasting new limits in design and construction, hopeful of polishing an image tarnished by the debt woes afflicting
Advertisement
It left more than 16,000 dead or missing and a nuclear power plant at risk of a catastrophic meltdown.

But it did not cause any damage to the Sky Tree's structure, which prides itself on its anti-seismic design and technology, or any injury to some 500 people who were involved in the construction work on the day.

On the other hand, the impact bent the antenna atop the 333-metre Tokyo Tower, which was overtaken by the Sky Tree as the highest structure in Japan a year ago.

The Tokyo Tower was to be reopened to visitors on Saturday after repairs and safety checks were completed.

"I heard the Sky Tree shook itself. But as I was watching from a nearby place and shaking myself, it was hard to tell if the tower itself was really shaking," said a spokesman for the Tobu Tower Sky Tree Co.

"But I definitely saw cranes were shaking on top of the tower, though," Hirotake Takanashi told AFP.

There were 50 to 60 workers in the upper levels of the steel tower at the time of the temblor.

It took nearly two hours to help them evacuate to the ground by using lifts intended for construction work between aftershocks, Takanashi said.

"We resumed the construction work after spending a few days to confirm no problem (was) caused to the structure," he said, adding that the 65-billion-yen (790-million-dollar) project is expected to be completed by the end of the year as planned.

"Of course, we are going ahead with full anti-earthquake measures."

To keep the structure safe during Japan's frequent earthquakes, the tower boasts a cutting-edge anti-seismic design, including pilings that fan out underground like the roots of a tree.

The tower consists of two parts, an outer steel frame and an inner shaft of reinforced concrete, which can move separately to cancel out their seismic energies -- a design idea borrowed from ancient Japanese pagodas.

In early 2012, once Japanese television networks switch entirely to digital transmissions, the Tokyo Sky Tree will take over television broadcasts from the 52-year-old Tokyo Tower to beam signals across the city's ever-rising skyline.

Dubai's Burj Khalifa tower, the new tallest building in the world, is 828 metres tall, it was revealed on Monday at the skyscraper's official opening in the Gulf emirate.
Advertisement
<< The 'Bride Market'
Impact of Television on Young Children >>

An Indian boy , just two and a half years old ,is standing tall at 4ft 5 ins and is believed to be the tallest toddler in the world.
Advertisement
News A-Z
A B C D E F G H I J K L M N O P Q R S T U V W X Y Z
What's New on Medindia

Nutam (400mg) (Piracetam) Accident and Trauma Care Pregnancy Confirmation Calculator A-Z Drug Brands in India The Essence of Yoga Find a Doctor Calculate Ideal Weight for Infants Loram (2 mg) (Lorazepam) Drug - Food Interactions Drug Interaction Checker
This site uses cookies to deliver our services. By using our site, you acknowledge that you have read and understand our Cookie Policy, Privacy Policy, and our Terms of Use