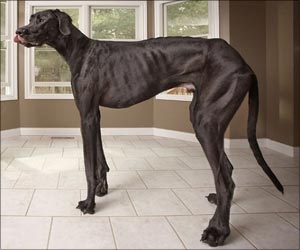 Giant George, the world's tallest dog died last Thursday. The owners of George, David and Christine Nasser, broke the news on GiantGeorge.com and wrote that their pet passed away peacefully surrounded by loved ones and thanked everyone for the love and support they gave him over the last few years, ABC News reported.

The Great Dane was 3 feet 7 inches from paw to his shoulder and almost seven feet long, and was declared the world's tallest dog by Guinness World Records.

George was known for his appearance on 'Live with Regis and Kelly' and 'Good Morning America'.

Dog's Behaviour Warning Sign of Elderly Owner's Health
A dog's behaviour can be used as an early warning sign that its elderly owner is struggling with ......

Dogs Have Emotions Just Like Humans
A recent research has revealed that dogs have emotions and feelings just like humans because they .....

Overweight Dogs may Die Young, Say Researchers
Obesity has a negative effect on the lifespan of pet dogs, reveals study....