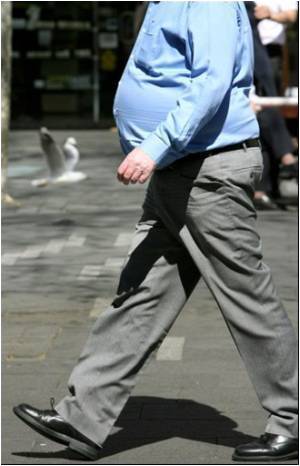 More than half a billion adults are obese and the rate of obesity doubles in number since 1980, says study.

Nearly one in nine of all adults -- are clinically obese, according to research by a team from Imperial College London, Harvard and the World Health Organisation (WHO).

In 2008, the latest year for which statistics were available, nearly one woman in seven and one man in 10 were obese, it found.


Being too fat causes three million premature deaths each year from heart disease, diabetes, cancers and other disorders, according to the WHO.

The researchers described the tableau as "a population emergency."

The BMI calculator helps you assess your weight indicating if it is normal or if you are underweight or overweight, based on your height.
Advertisement
"(It) will cost tens of millions of preventable deaths unless rapid and widespread actions are taken by governments and health-care systems worldwide," said the report, published by The Lancet.

But many developing countries, especially in the Middle East and in rapidly urbanising areas, are catching up.

"These results suggest that overweight affects one-in-three adults and obesity affects one-in-nine adults -- a tsunami of obesity that will eventually affect all regions of the world," Sonia Anand and Salim Yusuf of Canada's McMaster University wrote in a commentary accompanying the study.

The standard for assessing weight is the body-mass index (BMI), in which one's weight in kilos is divided by the square of one's height in metres.

A BMI of 25 to 30 corresponds to being overweight, while above 30 is obese.

Pacific islanders weighed in with the highest BMI levels, between 34 and 35, and notched up among the sharpest increases over the last three decades as well.

In Europe, women in Russia and Moldova were at the upper end of the scale with BMIs of 27.2 and 27.1, while the heftiest men on the continent resided in the Czech Republic and Ireland.

At the other end of the spectrum, Swiss women were the most svelte, with their French and Italian counterparts vying for second place.

Italy holds the distinction of being the only country in Europe where women's average BMI declined, dropping from 25.2 to 24.8.

The study also reported changes in blood pressure and cholesterol levels across nations.

Western European countries -- especially Iceland, Andorra and Germany -- have among the highest cholesterol levels in the world, while African nations have the lowest.

Systolic blood pressure -- the maximum pressure exerted by the heart -- is highest in the Baltic, and in East and West Africa.

The same levels were common in wealthy nations a generation ago, but have dropped dramatically since then, the study showed.

High-income countries have also seen a drop in cardiovascular diseases since 1980, despite high levels of obesity.

The United States in particular saw reductions in high blood pressure and cholesterol levels as well as a slowdown in tobacco use, according to the study.

This suggests that lifestyle choices -- including limiting consumption of animal products and sodium, and increasing physical activity -- can play a key role in slashing heart disease.

Although commonly considered a "Western" problem, obesity is also growing in unexpected regions like the Middle East, where the average weight levels in several populations fall just shy of the benchmark for obesity.

Slide show which explains obesity causes and tips on how to lose weight. Exercising before breakfast is most effective for weight loss.
Advertisement
Advertisement