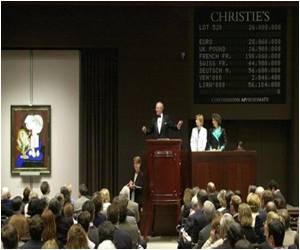 The first book printed in what is today the United States of America goes under the hammer, expected to fetch $15-30 million and become the world's most expensive book ever.

The translation of Biblical psalms "The Bay Psalm Book" was printed by Puritan settlers in Cambridge, Massachusetts in 1640 and will be offered at a one-lot auction by Sotheby's in New York.
Advertisement

The auction house has valued the book at $15-30 million.


The current world auction record for a printed book is $11.5 million, reached when a copy of John James Audubon?s "Birds of America" sold at Sotheby's in December 2010.
Advertisement
The settlers, who came to America to seek religious freedom, set about making their own preferred translation from the Hebrew original of the Old Testament book.

"'The Bay Psalm Book' is a mythical rarity. Unseen on the marketplace for more than two generations, it has become too rare to collect," said David Redden, head of Sotheby's books.

Redden said the volume had even greater significance than being the first book printed or written in America.

"This little book of 1640 was precursor to Lexington and Concord, and, ultimately, to American political independence. With it, New England declared its independence from the Church of England," he said.

Selby Kiffer, from Sotheby's special projects department, called it "not simply one of the great icons of book history, it is one of the greatest artifacts of American history."

There were 1,700 copies of the original 1640 edition. The eleven that have survived until today are in collections such as The Library of Congress in New York and Harvard College Library.

No copy has appeared at auction since 1947, when a different copy fetched $151,000 -- a record at the time for any book, including the Gutenberg Bible or Shakespeare's First Folio.

The book was sold by the Old South Church in Boston to benefit its work in the historic city's area. The same church possesses another copy of the "Bay Psalm Book."

Source: AFP
Advertisement
<< Nanosurface Opens Up New Front in Germ-Killing
Captain America Shield: One of the Most Dangerous Toys of 20... >>

4.6 Million Pound Lamborghini Set to Be Auctioned
Set to be auctioned in 2014 for a mind-blowing 4.6 million-pound-price is a Lamborghini Aventador .....