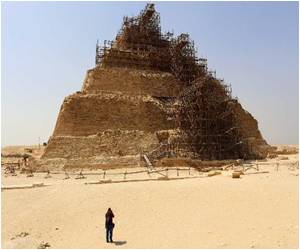 Lithuania has unveiled what it claims is the world's largest-ever coin pyramid.

Volunteers spent nearly three weeks arranging one million coins, worth 10,000 litas (2,900 euros), into a pyramid over one metre (yard) tall.

"We have certainly beaten the world record. Previously, the biggest pyramid of this kind was made up of 600,000 coins", said 26-year-old volunteer Domas Jokubauskis.


All the coins will eventually be donated to a children's charity.

The Baltic nation of three million, which joined the EU in 2004, will become the 19th member of the eurozone on January 1, 2015.

Egypt's antiquities minister denied claims that the country's first, Djoser pyramid had been damaged during restoration work by a company accused of being unqualified to do such work.
Advertisement
Its neighbours Estonia and Latvia joined the European single currency in 2011 and 2014 respectively, eyeing improved investor confidence.

Lithuanians are divided over the currency switch, with 47 percent supporting it and 49 percent against it, mainly due to fears of price hikes, according to a Eurobarometer survey in September.

The litas helped to consolidate Lithuania's statehood on the two occasions it restored independence from Moscow, in 1918 and 1990.

The new euro coins will still feature the national coat of arms -- featuring a knight on horseback with a sword and shield -- which has identified the country's currency since the 14th century.

The Egyptian government has been asked by the UNESCO to submit a detailed report on the restoration work.
Advertisement
Advertisement
This site uses cookies to deliver our services.By using our site, you acknowledge that you have read and understand our Cookie Policy, Privacy Policy, and our Terms of Use  Ok, Got it. Close
×