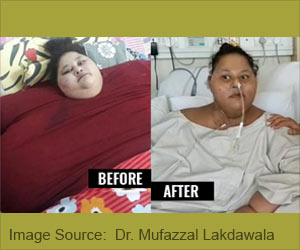 Eman Ahmed, formerly the 'heaviest' woman in the world, passed away in Burjeel Hospital in Abu Dhabi due to comorbid conditions, including heart disease and kidney dysfunction.

Ahmed, who earlier weighed 500kg and suffered from a rare thyroid condition since childhood, was treated in India in the month of may and was transferred to Burjeel Hospital to continue rehabilitation from bariatric surgery.

Advertisement
‘Kidney and heart complications, which were previously diagnosed during the course of her treatment, eventually caused her death.’


Tests had shown that Ahmed had a condition in which a leaking valve made some of the blood to flow back to the left ventricle, leading to a decrease in the capacity of the heart to pump sufficient blood to her body, and which would eventually lead to heart failure.
Advertisement
"Eman's heart echo revealed a severe regurgitation (leakage) of the aortic valve. We have put her on conservative treatment with possible valve replacement as a part of the long-term plan," Yassin El-Shahat, chief medical officer of the hospital, had said in May.

Hemal Shah, head of the department of nephrology at the hospital, said that while water retention doesn't usually result in an increase of more than 5-10kg, it was different in Eman's case.

Bariatric Surgery - Short Term and Long Term Outcomes
The benefits of bariatric surgery outweigh its side-effects. With the surgery you can lose 45 to ......

Why are Kidney Stones Common after Bariatric Surgery?
Learn more about the risks for kidney stones ("nephrolithiasis") after weight loss ("bariatric") ......

Top 15 Health Benefits of Bariatric Surgery
Bariatric or weight loss surgery is done on persons with severe obesity who are unable to lose ......

Alcohol Effects After Bariatric Surgery
Gastric sleeve and gastric bypass surgery potentiate the intoxicating effects of alcohol due to its ...