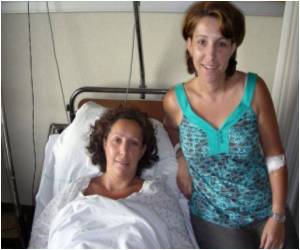 First ovarian transplant in the world between twins with Turner syndrome called a success with the birth of a healthy child. Karine Thiriot, 39, said she had been trying to conceive, notably through in vitro fertilisation, for some 15 years.

Thiriot lacked ovaries because of Turner Syndrome, which affects one girl born in 2,500, but her twin sister, though having a similar chromosome deficiency, was fertile and had two children before the transplant. So Thiriot's twin sister donated one of her ovaries to her.

The baby, named Victoria, was born in the Paris region on March 8, and is free of the disorder known as Turner Syndrome which affects both her mother and her aunt.


"It was the first such transplant between twins", Belgian gynaecologist Jacques Donnez, who carried out the operation in August 2009, told AFP.

Interactive section of Medindia gives details regarding Female reproductive system showing how the sperm fetilize the eggs
Advertisement
It was also the first ovarian transplant to be done in Europe, said Donnez, who has since successfully performed a similar operation involving sisters who are not twins.

A few months after the transplant Thiriot's regular reproductive cycle had established itself and she became pregnant quite normally.

"Victoria is totally normal and dosen't have Turner syndrome," she said.

Ovarian cancer affects both the ovaries and is referred to as the ''silent killer'' as the symptoms go ...