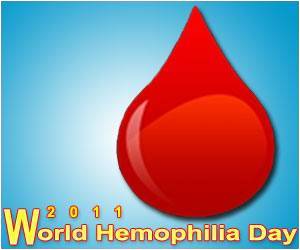 "The Many Faces of Bleeding Disorders: United to Achieve Treatment for All"

World Hemophilia Day is celebrated world globally on April 17th each year to spread awareness on Hemophilia and other bleeding disorders.

World Hemophilia Day falls on 17th April every year and is dedicated to stepping up awareness of hemophilia and other bleeding disorders.
Advertisement

Hemophilia is an X-linked, recessively- inherited clotting disorder that was called the "disease of the kings" as it occurred among the male descendants of Queen Victoria across Europe.


Today, it is found to be widely prevalent among all ethnic groups and races  worldwide.

The theme for the World Hemophilia Day 2011---  "The Many Faces of Bleeding Disorders: United to Achieve Treatment for All"-- hopes to celebrate the support for positive changes in those with bleeding disorders such as hemophilia, hemophilia carriers, those with von Willebrand disease, other factor deficiencies, and inherited platelet disorders.  Efforts will be taken to work together for a better future, and achieve the target of "Treatment for All".

Medindia interviewed K. Parthasarathy, Co-founder and Vice President, Hemophilia Society-Madras Chapter on how the society functions and how he successfully raised a hemophiliac kid.
Advertisement
About Hemophilia

Hemophilia is a chronic bleeding disorder that persists throughout the affected person's life.

People with bleeding disorders such as hemophilia either lack adequate amounts of a particular clotting factor, which is actually a protein that is present in blood to control bleeding, or, have clotting factors that do not work properly.

The severity of the disease usually depends on the amount of clotting factor that is absent or dysfunctional.

Hemophilia is more common in males than in females and is usually identified by the age of 5-6 years. It can be diagnosed by assessing the levels of clotting factor.

In hemophiliacs, and other bleeding disorder patients, even minor injuries, bump or a fall can trigger prolonged bleeding particularly after an injury or a surgery. They even experience uncontrolled internal bleeding without an external sign of bruise.

When the bleeding takes place into the joints and muscles it causes severe pain and even disability. If the bleeding occurs inside major organs, such as the brain, it may even lead to death.

There would be an attempt at focusing on the discrepancies in treatment across the globe and how people can live normal lives if proper treatments were provided to them.

How can we help?

Transfusions and intravenous injections have helped to control the disease to a large extent; nevertheless the management of the disease has always been very complex.

Each of us can do our bit to help these unfortunate patients and can even contribute to saving their lives. The first step would be to understand the disease, especially if we have a child or a dear friend with the disease.

Spreading awareness about Hemophilia, with inputs in the form of first or second hand real life stories or blogging about those with hemophilia can always help to create better awareness of the disease.

Some tips for those with bleeding disorders -

World Hemophilia Day 2009: Together, We Care