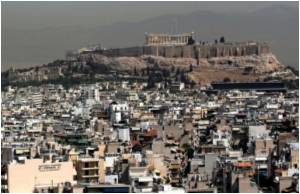 Plans to create a 'world class resort' at the former Athens airport of Hellinikon has been announced on Tuesday by a prominent Greek development fund, hoping bring around four billion euros ($5.4 billion) to Greece's ailing economy.

"Athens will become the first European capital with its own resort," Odisseas Athanassiou, CEO of Lamda Development, told a news conference.

The overhaul will translate into "something like four billion euros incremental (to Greek) GDP" including about a billion euros from tourism income alone, he added.


Situated eight kilometres (five miles) south of Athens, Hellinikon and an adjoining 337-berth marina span nearly 620 hectares (1,530 acres) and include a waterfront of about 3.5 kilometres.
Advertisement
A consortium comprised of Lamda, China's Fosun Group and Abu-Dhabi property firm Al Maabar in March landed a 99-year lease for Hellinikon at a price of 915 million euros.

The consortium has pledged to invest 5.9 billion euros over the next 15 years to create parks, leisure, exhibition and concert facilities, hotels and luxury residences at the site.

Eventually, the developers hope to attract a million tourists to the area annually.

"This is a major opportunity for Athens to create a truly world-class resort," said Russell Kett, chairman of London-based tourism analysts HVS.

"We envisage a major integrated resort, the first of its kind in Europe," he said.

The deal is still subject to approval from Greece's administrative court and parliament.

Overall, the Greek state has two years in which to complete the cumbersome land permit procedure or the investors are free to walk away, Athanassiou said.

Hellinikon was turned into a sports complex for the 2004 Olympics, but most of the venues built for the Games have rarely been used since.

"This is an extraordinary site...a missing jigsaw piece (for Athens)," said Antoinette Nassopoulos, a partner at British architectural firm Foster and Partners.

"Everything can happen (here)...sport, exhibitions, concerts," she said.

The developers say the project will benefit adjoining municipalities, but not all residents share that view, particularly as the plans include a casino.

Some gathered outside the Athens hotel where the presentation took place with banners reading "Hellinikon is not for sale."

Lamda Development is operated by the wealthy shipowning Latsis family.

The company built a media village for the Athens Olympics and Greece's largest shopping centre. It also rebuilt and runs one of the capital's main marinas south of Athens.

Street Art Vents Anger Over Austerity in Athens
Against the backdrop of a battered Greek flag, in wall art covering the side of a school building .....

People of Athens Fight for Green Space
Residents of the bohemian district of Exarcheia have scored a rare victory by turning a carpark ......