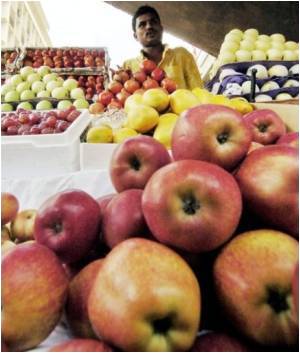 Could wonder material graphene help solve India's food safety woes linked to storage and transportation? Scientists may have inched closer to an answer.

Graphene, the thinnest substance on earth and 200 times stronger than steel, is the new buzzword in the global electronics industry and scientists at the Indian Institute of Engineering Science and Technology (IIEST) have applied its unique properties to sniff out a deadly cancer-causing food toxin with high sensitivity, just like finding a needle in a haystack.
Advertisement

World Health Organisation has designated "Food safety: from farm to plate, make food safe" as the theme of this year's World Health Day (April 7). It includes food safety along the whole length of the food chain in a globalized world, from production and transport, to preparation and consumption.


And the toxin in question, Aflatoxin B1 (one from the aflatoxin group of natural poisons), is a common contaminant in peanuts, chillies, cottonseed meal, corn, rice and other grains. Produced by a fungus, it is a potent liver carcinogen, impairs immune system and hinders growth in humans and animals.
Advertisement
"During transportation the toxin level can grow and multiply. So, we developed and tested a graphene-based sensor which gives out an ultra-sensitive and highly specific readout on the toxin level compared to other sensors," said Chirosree RoyChaudhuri, assistant professor, Department of Electronics and Telecommunication Engineering, IIEST, in Howrah, West Bengal. "The modified form of graphene (reduced graphene oxide) that we used can easily bind to the protein-like structure of the toxin and give an enhanced signal compared to other materials. It is 100 times more sensitive than conventional sensors," she said.

Approximately 4.5 billion people living in developing countries are chronically exposed to high, uncontrolled levels of aflatoxin. Moreover, there is a lack in awareness about these toxins in India, pointed out B.N. Reddy, professor, Mycology (study of fungus) and Plant Pathology Lab, Department of Botany, Osmania University, Hyderabad. "Western countries, on the other hand, have strict regulations governing the testing of food products for aflatoxins. Chronic health risks are particularly prevalent in India where the diets of people are highly prone to fungal toxins due to poor harvesting practices, improper storage and transport," said Reddy. Toxin presence also affects trade in food commodities with other countries. To manage the menace, one of the ways is employing simple and affordable detection techniques, said Reddy.

RoyChaudhuri said the new sensor can be manufactured economically, is portable and when refrigerated, has a shelf-life of about two-three months. It could be suitably modified to detect other types of toxins as well. "Specifically in this study, we have pointed out a different electrical aspect which has not been reported earlier. Graphene displays certain interesting electrical characteristics which imparts additional selectivity to the sensor," RoyChaudhuri said.

The research was published in 'Biosensors and Bioelectronics' in January this year and will come out in print in June. Other authors of the study are S. Datta and J. Basu from IIEST.

RoyChaudhuri claimed the graphene-based device can indicate toxin contamination "even when it is present at a level that is 10 times lower than its designated permissible limit in countries like India, U.S. and Europe". The use of graphene and other carbon-based nanomaterials, are growing rapidly, ever since its discovery a decade ago. At the same time, recent studies have suggested graphene may be toxic to humans and create environmental hazards as well.

So how could a graphene-based sensor ensure food safety? RoyChaudhuri informed the developed technique is non-invasive. "The food product doesn't come in direct contact with the sensor. A small amount of sample is required for testing. The remainder of the food item is untouched," she added.

Graphene can Neutralise Cancer Stem Cells
Researchers at University of Manchester have used graphene to target and neutralise cancer stem ......

Graphene Nanopores To Enable High-Speed DNA Reading
Researchers from Berkeley Lab and the UC Berkeley have come up with a simple process for producing ....

Cancer Biomarkers can be Traced by Graphene Sensor
Molecules that indicate an increased risk of developing cancer can be detected by an ultrasensitive ...

Graphene Rubber Bands Could Stretch Limits of Current Healthcare
Researchers have treated common elastic bands with graphene, to create a flexible sensor that is ......