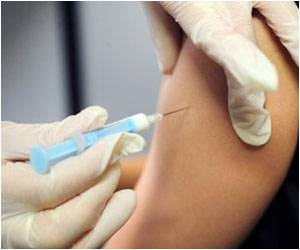 Women generally tend to have stronger immune responses to flu vaccines than men, but the immune response disappears as they age, reveals a new study. The findings of the study are published in the journal npj Vaccines.

The researchers evaluated responses to the flu vaccine in 50 adults age 18-45 years and 95 adults age 65 and older and found that the women in the younger group had a stronger immune response compared to the older women and all men.

Vaccines are biological products that impart immunity to the recipient. Vaccines may be live attenuated, killed or toxoids.
Advertisement
‘Vaccine-induced immunity declines with age in women. ’

Experiments in mice yielded similar results and suggested that estrogen levels of which lessen with age in females boosts females' immune responses to flu vaccines, while testosterone lowers males' responses. The scientists expect that their results will be generalizable to other vaccines.


"We need to consider tailoring vaccine formulations and dosages based on the sex of the vaccine recipient as well as their age," says study senior author Sabra Klein, Ph.D., an associate professor in the Department of Molecular Microbiology and Immunology at the Bloomberg School.

Routine Vaccination During a Hospital Stay is Safe: Study

This study proves the safety level of Flu vaccines in hospitalized patients. They were found to be safe.
Advertisement
Scientists have known that women tend to have stronger immune responses to vaccines, and also that the elderly tend to have weaker responses. Klein and colleagues in their study set out to get a better understanding of the interaction of these sex- and age-related differences.

First, they evaluated immune responses to the 2009 H1N1 influenza vaccine in 145 human volunteers--one group age 18-45 years, the other 65 and older. Analyzing key markers of the immune response, the researchers found that, on average, women in the younger group had a stronger response compared to both the men and the older women.

The team conducted a similar set of experiments in adult and aged mice and observed similar results. They also determined that the younger mice, compared to the older mice, were much better protected from a challenge with live flu virus--the younger female mice being best protected. This group, for example, had much less flu-induced lung inflammation after the virus challenge.

In the mice and in the human volunteers, the younger females, as expected, had higher bloodstream levels of estradiol, one of the important estrogens, compared to the older, post-menopausal females. Similarly, the younger males had higher bloodstream levels of testosterone compared to older males. Stronger vaccine response was linked to higher estradiol among the females and, more weakly, to lower testosterone among the younger males.

Klein and her colleagues found evidence that this association with sex hormone levels was causal. Removing the ovaries and testes of the mice to cut down estradiol and testosterone production eliminated the male/female differences in vaccine responses. When the scientists then artificially resupplied estradiol to some of the low-hormone female mice, the mice showed greater vaccine antibody responses. By contrast, resupplying testosterone to the castrated males caused them to have lower antibody responses.

"What we show here is that the decline in estrogen that occurs with menopause impacts women's immunity," Klein says. "Until now, this hasn't been considered in the context of a vaccine. These findings suggest that for vaccines, one size doesn't fit all perhaps men should get larger doses, for example."

She and her colleagues are now investigating the molecular mechanisms by which estradiol and other estrogens boost the antibody response to vaccines.

A biodegradable microneedle patch with a fusion influenza protein is being tested in mice to administer a booster dose of the influenza vaccine.
Advertisement
<< China Could Save 330,000 Lives by 2050 by Cutting Ozone Poll...
Black Color Backgrounds for Fresh Produce Get Shoppers to Bu... >>

New study has found that nearly 72% of children whose parents were given either flu fact sheet were vaccinated before the end of the season compared to around 65% of those that got usual care.