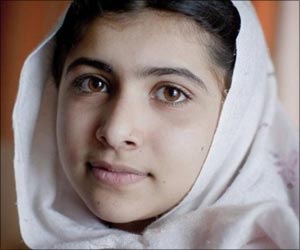 Malala Yousafzai, an activist who survived the Taliban attack, is now awarded a Human Rights award.

According to News24, Malala was declared winner of the Anna Politkovskaya Award on Friday.

Malala was once shot as she travelled to school in northwest Pakistan in October 2012, the report said.


The award is given annually by group RAW in WAR to a female human rights defender, the report added.

RAW in WAR said that Yousafzai was chosen for her courage to speak out when nobody else dared, for her strength to give a voice to the many women and girls, whose voices cannot be heard, and for her passionate belief in promoting education for girls.

She was due to receive the award in London from 104-year-old Nicholas Winton, who rescued Jewish children from Nazi-occupied Czechoslovakia, the report further said.