Women Who Breastfeed Less Likely to Suffer from Hypertension

Breastfeeding begin within the first hour of a baby's life and continue as often and as much as the baby wants. New research suggests that women who breastfeed more children and for a longer duration were less likely to suffer from hypertension after they reach menopause.

According to the researchers, elevated blood pressure is the greatest single risk factor for disease and mortality.

"Our findings endorsed the current recommendations for breastfeeding for the benefit of maternal health in later lives," said the lead author of the study, Nam-Kyong Choi from Ewha Womans University in South Korea.


‘Breastfeeding of more children and for longer duration associated with lower risk of hypertension in postmenopausal women.’


Evidence from epidemiologic data has also shown the beneficial effects of breastfeeding on the health of infants and their mothers.

It has been well documented that long-term breastfeeding is associated with reduced children's allergies, celiac disease, obesity and diabetes mellitus, the researchers said. However, the effects of breastfeeding on maternal health have been little studied compared with the effects on the children.

For the study, published in the American Journal of Hypertension, researchers examined 3,119 non-smoking postmenopausal women aged 50 years or older in the 2010-2011 Korea National Health and Nutrition Examination Survey.

The highest quintile of duration of breastfeeding (96 to 324 months) showed a 45 percent lower risk of hypertension. The researchers, however, said that this link may prove to be less true in obese women. 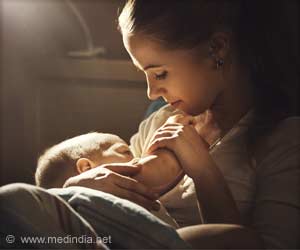 Every Mom Should Know How To Make Breastfeeding Comfortable
Breastfeeding seems to be a most natural process, but to some, it may be a challenge. Be patient and feed often.
READ MORE

Breastfeeding May Not Reduce Risk of Hay Fever, Eczema
Individuals who were breastfed as babies have an increased risk of developing hay fever and eczema.
READ MORE

Do Breastfeeding Babies Prefer One Particular Breast?
Breastfeeding the baby offers protection, immunity against various diseases and usually babies prefer only one side of the breast.
READ MORE

Breastfeeding Difficulties Due to Obesity During Pregnancy
Nearly, 1 in 4 women in the United States become obese during pregnancy. The process of lactogenesis is delayed due to excessive weight gain during pregnancy.
READ MORE