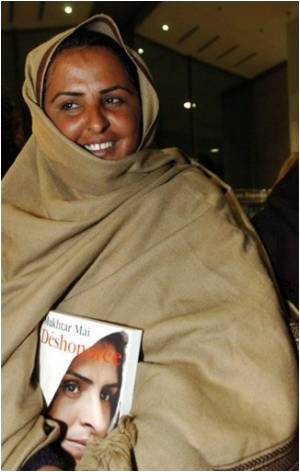 Rehana Yasmin thought the kindly women had come to help her after floods devastated her village. Instead they passed her on to two men -- who raped her at gunpoint.

The 19-year-old student said three women took her from her home in the central Pakistani district of Rajanpur last summer, saying aid was being distributed for flood victims and they would get her food.

On International Women's Day 2011 Dr. Gita Arjun discussed the importance of empowering and encouraging women to pay attention to their health and increasing women's awareness of wellness and fitness.
Advertisement

"But they took me to another house away from my home and handed me over to two sons of one of the women," a tearful Yasmin told AFP, her eyes reddening behind her black veil.


The men forced her to sign marriage papers at gunpoint and then raped her twice, telling her it was in revenge for her father being nominated to a village committee to help victims of the worst floods in the country's history.

President Pratibha Patil, Indira Nooyi, Sunitha Williams and Kiran Mazumdar may be 'woman on top' icons, but they certainly are not the end results of female empowerment.
Advertisement
"They had a feud with my father who had just been appointed as a member of the relief committee of our village," she said.

"They wanted to teach him a lesson. They told me: 'if he can't protect his daughter, he can't help the village either'."

In deeply conservative rural Pakistan, women often remain seen as the subjects of their menfolk, to be defiled by their rivals, or killed to maintain their honour.

Almost a thousand women were raped in Pakistan during 2010 while more than 2,000 were abducted and almost 1,500 murdered, according to the Aurat Foundation, an organisation working for the protection of women in the country.

A further 500 were the victims of "honour killings", a custom under which relatives and other fellow tribesmen kill a woman if they believe she had an affair.

In Pakistan, the practice of killing women to restore family honour is known as Karo-kari. And Gulshan Bibi narrowly avoided this fate after an enemy of her father accused her of adultery.

"When a Karo-kari is declared, it is not the facts that count but the accusations," she said.

"When someone is accused of adultery, even if the person is innocent, she knows she can be killed. Sometimes, if a woman smiles at a man, she is declared Kari by enemies who are going to complain to the tribal chief."

Gulshan, from Sindh province, may have escaped with her life -- but she was kidnapped and raped after being declared Karo-kari when her father refused to obey the orders of a local feudal lord.

Refusing to hand her over to tribal "justice", her father moved his daughter away to, he hoped, safety -- but she was kidnapped by a chieftain who imprisoned and raped her for a year.

The police eventually freed her but she later gave birth to the rapist's daughter.

"Even my husband did not support me and teamed up with the tribal chief," she said from her bed, finally finding safety in a women's shelter. "I was kept with many other girls, I even saw a few of them getting murdered."

The suffering of Pakistan's women is writ large in more terrible statistics released ahead of the centenary Tuesday of International Women's Day, an annual global celebration of female achievement.

In Pakistan, over 600 women committed suicide. Another 70, aside from rape victims, were sexually assaulted while almost 500 reported domestic violence. Among the victims, 70 were burnt or had acid thrown at them, according to the Aurat Foundation, which campaigns for women's rights.

"The figures present a grim picture of the overall state of affairs regarding violence against women in the country," the foundation said in its annual report.

There were 8,000 offences against women last year, but activists say the true number could be far higher.

"The main issue in Pakistan is the poor implementation of law, there is no rule of law, people manipulate the law," said Rabeea Haadi, the Aurat Foundation's national coordinator.

The shelter where Gulshan has finally found refuge, which sits next to lush green fields, was set up by Mukhtar Mai -- near the spot where she herself was raped nine years ago.

She now helps protect women facing threats at the hands of influential men.

"There are dozens of cases like Yasmin and Bibi," she said. "We can't fight against such incidents until we establish a fair judicial system and all the victims get justice."

Mukhtar Mai was raped by four people on the orders of a jirga, or tribal court, in 2002 and is still fighting for justice -- the Supreme Court reserved the final decision in her case last month.

Activists are unhappy with the government's efforts to improve the situation for female victims in the country.

"Almost 85 percent of Pakistani women are subject to domestic violence at least once in their lifetime and most repeatedly during their life," said Tahira Abdullah, the country's leading female rights activist.

"The police stations are on the payroll of the feudal and the tribal chieftains, if a woman is kidnapped and raped or gang-raped by a son of a feudal landlord and his friends, who is she going to go to?"

It is estimated that 20% of all woman are believed to have experienced incest before their eighteenth year. Incest as we know today mostly takes place between an adult and a child or an adolescent.
Advertisement
<< Children With H. Pylori Infection Have Lower Levels of Iron
Umbilical, Menstrual Blood Stem Cells May Offer New Therapi... >>