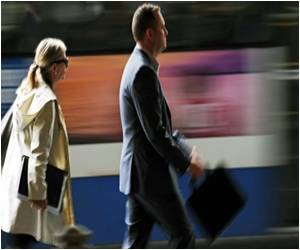 In a report on gender equality in business, World Bank revealed that at least 15 countries give husbands the power to prevent their wives from working.

"Many societies have made progress, gradually moving to dismantle ingrained forms of discrimination against women. Yet a great deal remains to be done," said World Bank President Jim Yong Kim in the preface to the report.

The tradition of gender equality in Sweden has famously put more mums in the workplace while rising numbers of dads stay at home.
Advertisement

Among 143 countries covered in the report "Women, Business and the Law 2014", 15 -- including Iran, Syria, Bolivia and Gabon -- give men the right to object to and prevent their wives from taking jobs.


In 79 countries, laws restrict the kind of work women can do, the report said.

"The most extensive restrictions on women's employment are in Eastern Europe and Central Asia," the report said.

Gender equality has been advocated by the UN's Food and Agriculture Organisation (FAO) in agriculture in order to increase farm production and reduce the world's hungry by at least 100 million.
Advertisement
In the Republic of Guinea, it said, a wife can fight her husband's decision in court, but she must prove that it is unjustified to have his decision overturned.

Such rules remain in part due to history.

"Vestiges of history remain codified in certain economies simply because legislation such as the Code Napoleon was adopted wholesale and not regularly reviewed or updated.

"The notion of head of household, for example, was removed from France's Civil Code in 1970 but persists in many civil codes throughout West Africa."

In Russia, women are banned from 456 professions, including drivers of farm trucks, conducting freight trains and woodworking.

Many of those rules were inherited from the former communist regime of the Soviet Union and were left unchanged.

One result, the report said, was that the Russian Federation had a high earnings difference between genders during the transition to a market economy.

But at least 29 countries, including Saudi Arabia, Honduras and Senegal, have laws that systematically establish men has family heads giving them powers over crucial decisions such as where to live, obtaining important documents like passports, or opening bank accounts.

But the report notes that developed Western countries have also been slow to change their rules. Permission for women to launch their own court cases without their husbands' permission came in Spain only in 1981 and, in Switzerland, in 1984.

Progress continues, according to the report. In two years, 48 legal changes increased gender parity in 44 countries, including Ivory Coast's 2013 decision to allow women to work without their husband's permission.

On the other hand, Egypt recently moved the other way: in the wake of the country's revolution, and the political rise of Islamic forces, the country removed constitutional guarantees against gender discrimination.

According to data two-thirds of Australia's top 500 companies had no female executives and less than 10 percent of directors were women. This comes on the back of a sexism row in politics.
Advertisement
<< Environmental Chemical Risks Loom Large for Pregnant Women
Air Pollution More Deadlier Than Road Accidents in Brazil >>