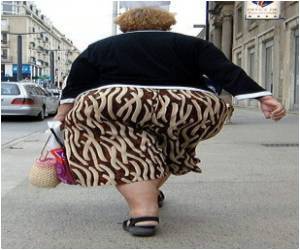 A new study has said that bicycling and brisk walking help pre-menopausal women control weight, especially those who are overweight and obese.

Additionally, the research found that slower walking does not offer the same benefits as brisk walking.

Anne C. Lusk, of the Harvard School of Public Health, Boston, and colleagues, studied 18,414 women who participated in the Nurses' Health Study II, which is an ongoing study of more than 116,600 U.S. female nurses who were age 25 to 42 when the study began in 1989.


The current evaluation included women who were premenopausal through 2005, focusing on weight change in participants between 1989 and 2005.

The 1989 baseline characteristics of the study found that 50 percent of the women spent time slow walking, 39 percent reported spending time walking briskly and 48 percent reported they spent time riding a bicycle. In 2005, participants on average reported spending more time walking briskly, some time walking slowly and the least amount of time bicycling.
Advertisement
Additionally, the average time spent sitting at home was five times as much as time spent in total activity.

According to the results of the study, women who did not bicycle in 1989 but increased their bicycling by 2005 were less likely to have gained weight, even when riding for five minutes a day.

Even less weight gain was seen with greater duration of bicycling. Comparatively, women who initially bicycled for more than 15 minutes day in 1989 but decreased time by 2005 gained more weight.

Additionally, normal-weight women who bicycled more than four hours a week in 2005 had lower odds of gaining more than 5 percent of their baseline body weight, as reported in 1989, compared with those who reported no bicycling.

"Unlike discretionary gym time, bicycling could replace time spent in a car for necessary travel of some distance to work, shops or school as activities of daily living. Bicycling could then be an unconscious form of exercise because the trip's destination, and not the exercise, could be the goal," the authors said.

The study has been published in the Archives of Internal Medicine, one of the JAMA/Archives journals.