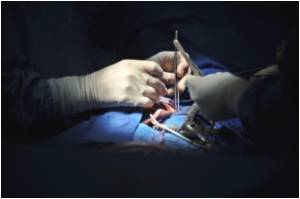 Doctors in Mumbai had to modify a woman's vital organs in order to save her life.

Deepa Joseph of Thane, 29, had undergone a bariatric surgery called sleeve gastrectomy at the age of 26 after she developed hypertension and diabetes. Deepa weighed 128 kg and doctors at the Hiranandani Hospital operated upon her.

Deepa l;ost 55 kgs after operation, but did not return for follow-up, which caused a hole to develop on the left side of her abdomen. Whatever she ate seemed to get out through that hole. After consulting numerous doctors, Deepa went back to the Hiranandani Hospital, where doctors found all her vital organs entangled in her stomach.


Dr Shashank Shah, bariatric surgeon at Hiranandani Hospital, told DNA that part of the oesophagus, stomach, upper part of the diaphram and lower part of the heart and the left lung were fused together. "I had to carefully release the intestines that were clubbed together and reconnect her modified oesophagus to her stomach," Shah said. Joseph now weighs 72kg and her diabetes too is cured. "