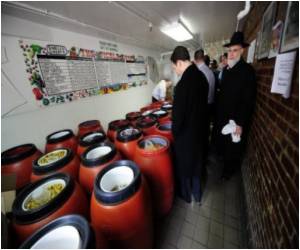 A bizarre and extremely freaky incident occurred in Harbin City, Northern China, when a woman was caught unawares after a pickled venomous snake in a jar woke up after 3 months and bit her.

The snake, a viper, was pickled sometime in June this year.

Health benefits of eating pickles are numerous as they are rich in iron, potassium, calcium, manganese and vitamin A. Pickles not only benefit normal people, but also benefit obese and pregnant women.
Advertisement

The woman was actually in the process of making the strange concoction called Shejiu, known in Asia for its healing properties.


The snake had been surviving in the jar since June and this is possible only if the jar was not airtight.

Experts have said that snakes do have the ability to reduce their metabolism which allows them to survive even if they are pickled.

Natural coolant the popular snake gourd is a big winner from the gourd family providing both cosmetic and therapeutic benefits to your body.
Advertisement
The woman in question, who did not want to be identified, reached out for the bottle of pickle after she suffered from joint pains, and seeing that it was dry, poured more alcohol into the bottle. As she did so, the viper inside the bottle began to wiggle, jumped out of the bottle and bit her finger.

The woman was rushed to hospital and fortunately saved due to timely treatment.

A new study conducted by researchers at the University of Arizona has revealed that the venom of spiders belonging to the genus Loxosceles produces a unique chemical
Advertisement
<< Vladimir Putin Teapot Reminds Some Users of Litvinenko Pois...
Emotional Connection With Partner as Important as Orgasm fo... >>

How to Choose the Best Eczema-Friendly Moisturizer for Children?
View all
News Archive
News Resource
News Category
Monkeypox may Provoke Travel Restrictions  Here's Why Global Outbreak of Rare Monkeypox Disease in Europe 5 Million Animals Vaccinated Against Foot-and-Mouth Disease in Mongolia Poor Vision is Usually Mistaken for Brain Cognition Breakfast Mistakes You Should Avoid
More News
Sign up for Wellness Consult a Doctor Sign up for Selfcare