Woman Dies of Broken Toe Due to NHS Blunder 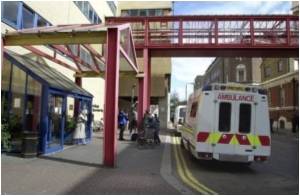 A British mother died of a broken toe after clumsy hospital staff at the National Health Services failed to call her back for the routine check-up that could have saved her.

Deborah Bowden died in her husband Lee's arms at the side of a road as her children watched her from the car.

She died of a blood clot developed under the plaster cast that had moved to her lung and killed her.


"Deborah was my life. I cradled her in my arms as she slipped away, killed by a broken toe, which is just ridiculous," News Of The World quoted 40-year-old Lee as saying.

NHS Targets to be Replaced by New Goals

Deborah broke her right big toe on August 30, 2009, when she slipped on the stairs at her home in Stockport, Greater Manchester.

"She'd been going mad laid up at home. But minutes after we got down the road Deborah said she didn't feel well and just slumped on to me. I pulled over, brought her round and we decided to head to the hospital. A few moments later she just let out a groan and fell forward again," Lee said.

"I stopped and got her on to the pavement. I'm a trained first-aider and tried to revive her but I knew she'd gone," Lee added.

The massive blood clot had moved up to her thigh where a piece broke off and travelled to her lung leading to her death.

"I'm sure if Deborah had been given her appointment at the right time they'd have spotted the clot and she'd be here today," Lee said.

Free IVF Treatment for Women Aged 40 and Over on NHS?

NICE could be on the verge of doing away with its controversial recommendation for an age limit of 40 years for IVF treatments
Advertisement
Advertisement
This site uses cookies to deliver our services.By using our site, you acknowledge that you have read and understand our Cookie Policy, Privacy Policy, and our Terms of Use  Ok, Got it. Close
×