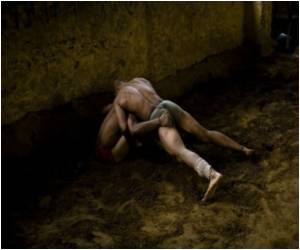 The findings are consistent with studies linking testosterone changes to aggressive and competitive behavior in male animals-and may even suggest ways of enhancing a wrestler's 'social dominance' to facilitate future success.

Anabolic steroids can produce power- packed, adrenaline - pumping performances but they also reflect a saga of condemnation and shame.
Advertisement

The researchers collected blood samples before and after matches in members of an elite collegiate wrestling team. Levels of testosterone and other hormones were compared for match winners versus losers.


Other hormones measured-cortisol and epinephrine (adrenaline)-did not differ significantly between winners and losers.

Testosterone effect doesn't last long in elderly, new study shows.
Advertisement
"These data suggest that winning wrestlers may use a different regulatory mechanism for their acute testosterone responses than losers," said lead author Andrew C. Fry of the University of Kansas and co-authors.

Previously also, studies have reported such differences not only in wrestlers and other athletes, but also in chess players-"even in games of chance such as those that involve a coin toss," the researchers noted.

The new findings confirm the difference in testosterone responses between winners and losers, and may also help in understanding the mechanisms responsible for this difference.

The researchers believe that the link between testosterone and winning wrestling matches "may present an excellent example of survival of the athlete within the construct of competitive sport performance."

The results may even have implications for athletic training, with an eye toward improving future sports performance.

"What has not been fully appreciated is the critical role of establishing social dominance in sport. Based on data from the animal kingdom, winning wrestlers appear to establish a mechanism conducive to future success and long-term survival as a wrestler," wrote the researchers.

According to a new US study high school football players and wrestling athletes suffer the highest rate of severe injuries.
Advertisement
<< Age-Related Differences Observed in Hormonal and Molecular ...
Superbugs in Animal Farms >>