Willpower Stronger In Smokers Who Give Up 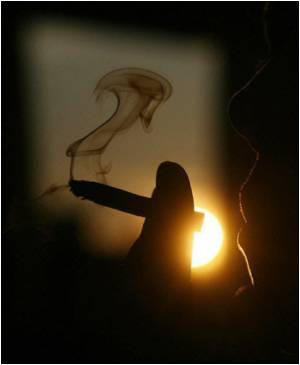 The willpower of smokers who give up for good is not just strong, it is stronger than in those who have never smoked, a study shows.

Smoking causes deposition of fatty deposits in the blood vessels which is called atherosclerosis. Slowing of blood flow also occurs which in turn can lead to thrombus formation. This can result in stroke.
Advertisement


The investigators found that when doing these tasks, the current smokers compared to the never-smokers showed reduced functioning in prefrontal regions that are related to controlling behavior. In addition, the current smokers showed elevated activity in sub-cortical regions such as the nucleus accumbens that respond to the reward value or salience of the nicotine stimuli. However, in marked contrast, the former smokers did not show this sub-cortical activity, but instead showed increased activity in the frontal lobes  the areas that are critically involved in controlling behavior. Moreover, the former smokers were "super-normal", showing greater levels of activity in these prefrontal regions than the never-smokers.

Tired of people asking you to stop smoking around them? Don't want to be ordered around by public smoking bans? Simple steps that help you to quit smoking.
Advertisement
The implication is that the brain regions responsible for what might be considered "willpower" show more activity in those who have quit smoking. This type of willpower can be measured, can be related to specific brain regions, and would appear to be related to being able to quit cigarettes. These results reinforce the value of smoking cessation therapies that stress the importance of, or that help to train, the cognitive skills involved in exercising control over drug desires.

The most amazing and complex organ in the entire universe, the human brain continues to remain an enigma.
Advertisement
<< Same Targets To Block Cancer And Combat Down Syndrome
Lower Vitamin D Levels Behind Hypertension Problems Among B... >>

Willpower Stronger In Smokers Who Give Up Personalised Printable Document (PDF)