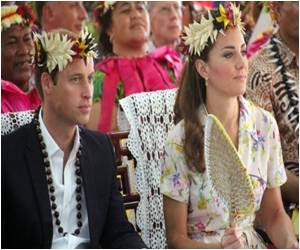 While there has been a lot of talk that Prince William and Kate Middleton's first child will be a daughter, the Duke and Duchess of Cambridge are preparing for any eventuality and will be naming their baby after their grandfather, Philip, if they have a boy

Royal aides told the Daily Star that the royal couple have short-listed the traditional name in honour of the Duke of Edinburgh.


A royal insider said that the name Philip is in the frame for a boy and the baby will certainly have it somewhere in his name.

The source said that name is popular with the couple at the moment and could even be the first name as William is very fond of his grandfather.

The aide said William, 30, will make the decision if they have a son.

During a whistle-stop visit to Scotland last week, the couple had kept tight-lipped about their options for names.

Source: ANI
Advertisement
<< WHO Says New Strain of Bird Flu in China is Not Spreading B...
New Scheme in Oz to Introduce Paid Leave for Kidney Donors >>