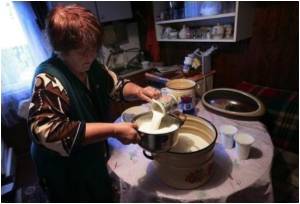 British scientists are testing a yoghurt drink that could provide a cure for millions of hayfever sufferers.

In previous studies, it has already been established that probiotic yoghurt drinks have immunity-boosting properties.

But researchers at the University of East Anglia and Norwich Research Park are recruiting volunteers to test how yoghurt might be used to cure the devastating condition.


The team of scientists has completed a pilot study on a small group of sufferers, which found that yoghurt drinks containing the bacteria Lactobacillus casei Shirota (LcS) helped the immune system in responding to pollen.

A new type of yoghurt has been found to be effective against bacteria that cause stomach ulcers, according to a new study.
Advertisement
"There have been previous studies carried out into the effect of probiotics but none have specifically looked at their effect on hayfever. This is extremely early in the process but we would be very interested to see the outcome once the new study has been completed," the Daily Express quoted Lindsey McManus, of the charity Allergy UK, as saying.

Bulgarians Go Gaga Over Their Yoghurt!

Daily Calorie Requirements The Essence of Yoga Sinopril (2mg) (Lacidipine) Sanatogen Vent Forte (Theophylline) Noscaphene (Noscapine) A-Z Drug Brands in India Find a Hospital Blood Donation - Recipients Pregnancy Confirmation Calculator
This site uses cookies to deliver our services. By using our site, you acknowledge that you have read and understand our Cookie Policy, Privacy Policy, and our Terms of Use