Why Overhearing Mobile Phone Conversations Can Be So Distracting 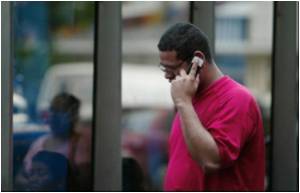 Overhearing mobile phone conversations can be very annoying. And now, a new study has discovered why.

Hearing just one side of a conversation is much more distracting than hearing both sides and reduces our attention in other tasks.

When two people click in a conversation, they are said to have a meeting of minds. Now science has proven the same.
Advertisement

Lauren Emberson, a psychology Ph.D. candidate at Cornell University, came up with the idea for the study when she was taking the bus as an undergraduate student at the University of British Columbia in Vancouver, Canada.


"I was commuting for 45 minutes by bus every day and I really felt like I couldn't do anything else when someone was on a cell phone," she says. "I couldn't read. I couldn't even listen to my music. I was just so distracted, and I started to wonder about why that could be."

You Get More Annoyed If You Overhear One-sided Phone Conversations

Your annoyance at having to listen to a one-sided phone conversation is normal behaviour, say researchers.
Advertisement
For the experiment, Emberson recorded two pairs of female college roommates as they had a cell phone conversation.

Then she played the recordings at volunteers as they did various tasks on the computer that require attention, such as tracking a moving dot using a computer mouse.

Sure enough, volunteers were much worse at the concentration tasks when they could only hear half of the conversation. Emberson thinks this is because our brains more or less ignore predictable things, while paying more attention to things that are unpredictable.

"It's definitely changed my own etiquette," says Emberson. "I'm a lot more sensitive about talking on the phone in public. It has a really profound effect on the cognition of the people around you, and it's not because they're eavesdropping or they're bad people. Their cognitive mechanism basically means that they're forced to listen."

After 50 years of marriage, most couples chat for three minutes over dinner, exchanging just 150 words, a new British study has found.
Advertisement
Advertisement