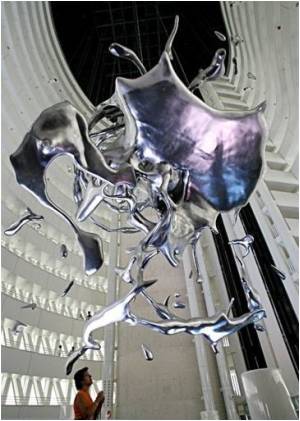 Scientists have always pondered over why hot water froze faster than cold.

Xi Zhang at the Nanyang Technological University in Singapore and a few pals provide one explanation to Mpemba effect, the observation that warm water freezes more quickly than cold water. They said that the Mpemba paradox is the result of the unique properties of the different bonds that hold water together.


But put water molecules together and hydrogen bonds also begin to play an important role. These occur when a hydrogen in one molecule comes close the oxygen in another and bonds to it.
Advertisement
Hydrogen bonds are weaker than covalent bonds but stronger than the van der Waals forces that geckos use to climb walls.

But as the liquid warms up, it forces the hydrogen bonds to stretch and the water molecules sit further apart. This allows the covalent molecules to shrink again and give up their energy. The important point is that this process in which the covalent bonds give up energy is equivalent to cooling.

In fact, the effect is additional to the conventional process of cooling. So warm water ought to cool faster than cold water, they say. And that's exactly what is observed in the Mpemba effect.