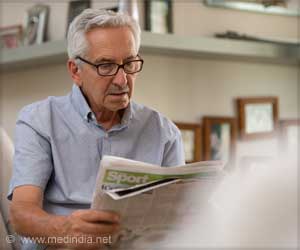 New study investigates the reason behind why older people read more slowly. The findings of the study are published in the journal Psychology and Aging.

One of the most obvious changes that come with aging is that people start doing things more slowly. Numerous studies have shown that aging also affects language processing. Even neurologically healthy people speak, retrieve words and read more slowly as they get older. But is this slowdown inevitable?


Researchers from the Higher School of Economics have been working to answer this question in their article 'No evidence for strategic nature of age-related slowing in sentence processing.'


‘Aging may cause people to start doing things slowly. However, researchers suggest that older readers embrace their normal reading speed and do not try to forcefully increase it as slow reading may help provide a high rate of text understanding to the readers.’
Read More..


Researchers from the HSE Centre for Language and Brain investigated whether slower reading in older people is 'strategic.' The researchers aimed to understand whether this slowdown is necessary to understand a text, or whether it happens due to 'strategic' reasons, such as excessive cautiousness, fear of making a mistake or to save the cognitive effort and adjust the workload to one's neurophysiological capabilities.

'We hypothesized that the elderly might, consciously or unconsciously, be 'overcautious' and read more slowly than they could have,' said Svetlana Malyutina, deputy director of the Centre for Language and Brain.

The study involved volunteers from two age groups: younger people aged 18 to 24, and older people aged 59 to 81. At first, the researchers determined the individual reading speed for each of the participants: sentences appeared on a computer screen word-by-word, and the participants had to press the button to proceed to the following word. This allowed establishing the speed preferred by the participants themselves. On the next day of the experiment, the word presentation rate was imposed externally: in the first part of the testing, it was equal to the participant's average reading speed, and in the second part, it was twice as fast.

The researchers assumed that initially, younger participants were choosing the fastest possible speed that allowed them to understand what they had read, while older participants were 'strategically' reading more slowly than they could have. Thus, it was expected that the externally increased sentence presentation rate would decrease the understanding among older people to a lesser extent than among young people.

But this hypothesis wasn't supported: when sentence presentation was sped up, the rate of correct answers decreased equally among younger and older participants. Thus, the study did not find evidence that older people read more slowly due to 'strategic' reasons when they choose their own reading speed. 'The age-related slowdown is probably inevitable after all. It may provide the necessary time for lexical access and grammar analysis', explained Anna Laurinavichyute, a junior research fellow at the HSE Centre for Language and Brain.

The researchers recommend that older readers embrace their natural reading speed and do not try to 'forcefully' increase it. In all likelihood, this slowdown helps provide a high rate of text understanding.