Why Are Certain Diseases More Common in Men Than Women? 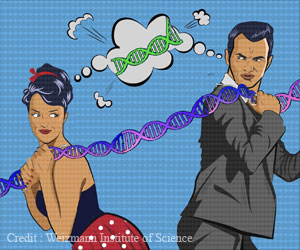 The prevalence of certain diseases or reactions to drugs differ in men and women. But how are these connected to one's sex?

Weizmann Institute of Science researchers recently uncovered thousands of human genes that are expressed -- copied out to make proteins -- differently in the two sexes. Their findings showed that harmful mutations in these particular genes tend to accumulate in the population in relatively high frequencies.


The detailed map of these genes, provides evidence that males and females undergo a sort of separate, but interconnected evolution.


‘Men and women undergo different selection pressures so harmful mutations in these particular sex-related genes tend to accumulate in the population in relatively high frequencies.’

Specifically, about 15% of couples trying to conceive are defined as infertile, which suggested that mutations that impair fertility are relatively widespread. This seems paradoxical: Common sense says that these mutations, which directly affect the survival of the species by reducing the number of offspring, should have been quickly weeded out by natural selection.

Pietrokovski and Gershoni showed that mutations in genes specific to sperm formation persist precisely because the genes are expressed only in men. A mutation that is problematic for only half the population, no matter how detrimental, is freely passed on to the next generation by the other half.

In the present study, the researchers expanded their analyses to include genes that, though not necessary for fertility, are still expressed differently in the two sexes.

To identify these genes, the scientists turned to the GTEx project -- a very large study of human gene expression recorded for numerous organs and tissues in the bodies of close to 550 adult donors. That project enabled, for the first time, the comprehensive mapping of the human sex-differential genetic architecture.

Pietrokovski and Gershoni looked closely at around 20,000 protein-coding genes, sorting them by sex and searching for differences in expression in each tissue. They eventually identified around 6,500 genes with activity that was biased toward one sex or the other in at least one tissue.

For example, they found genes that were highly expressed in the skin of men relative to that in women's skin, and they realized that these were related to the growth of body hair. Gene expression for muscle building was higher in men; that for fat storage was higher in women.

The two then looked at tendencies to accumulate mutations, to see if natural selection puts more or less pressure on genes that are specific to men or women. That is, to what extent are harmful mutations weeded out or tolerated in the population?

Indeed, the researchers found that the efficiency of selection is weaker in many such genes. "The more a gene was specific to one sex, the less selection we saw on the gene. And one more difference: This selection was even weaker with men," says Gershoni.

Although they do not have a complete explanation for this additional difference, the researchers point to a theory of sexual evolution first proposed in the 1930s: "In many species, females can produce only a limited number of offspring while males can, theoretically, father many more; so the species' survival will depend on more viable females in the population than males," explains Pietrokovski. "Thus natural selection can be more 'lax' with the genes that are only harmful to males."

Aside from the sexual organs, the researchers discovered quite a few sex-linked genes in the mammary glands -- not so surprising, except that about half of these genes were expressed in men. Because men have fully fitted but basically nonfunctional mammary equipment, the scientists made an educated guess that some of these genes might suppress lactation.

Less obvious locations included genes that were found to be expressed only in the left ventricle of the heart in women. One of these genes, which is also related to calcium uptake, showed very high expression levels in younger women that sharply decreased with age; the scientists think that they are active in women up to menopause, protecting their hearts, but leading to heart disease and osteoporosis in later years when the gene expression is shut down.

Yet another gene that was mainly expressed in women was active in the brain, and though its exact function is unknown, the scientists think it may protect the neurons from Parkinson's -- a disease that has a higher prevalence and earlier onset in men. The researchers also identified gene expression in the liver in women that regulates drug metabolism, providing molecular evidence for the known difference in drug processing between women and men.

"The basic genome is nearly the same in all of us, but it is utilized differently across the body and among individuals," says Gershoni. "Thus, when it comes to the differences between the sexes, we see that evolution often works on the level of gene expression."

Pietrokovski adds: "Paradoxically, sex-linked genes are those in which harmful mutations are more likely to be passed down, including those that impair fertility. From this vantage point, men and women undergo different selection pressures and, at least to some extent, human evolution should be viewed as co-evolution. But the study also emphasizes the need for a better understanding of the differences between men and women in the genes that cause disease or respond to treatments."

Prof. Shmuel Pietrokovski's research is supported by the Leo and Julia Forchheimer Center for Molecular Genetics; and the estate of Georges Lustgarten. Prof. Shmuel Pietrovski is the incumbent of the Herman and Lilly Schilling Foundation Professorial Chair.

The Weizmann Institute of Science in Rehovot, Israel, is one of the world's top-ranking multidisciplinary research institutions. Noted for its wide-ranging exploration of the natural and exact sciences, the Institute is home to scientists, students, technicians and supporting staff.

Institute research efforts include the search for new ways of fighting disease and hunger, examining leading questions in mathematics and computer science, probing the physics of matter and the universe, creating novel materials and developing new strategies for protecting the environment.