Why and to What Extent a Large Hip can Protect from Type 2 Diabetes and CVD: Review 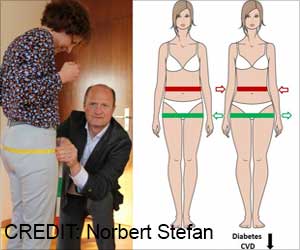 Fat which is stored on the hips and thighs could offer protection against type 2 diabetes and cardiovascular diseases (CVD), reveals a new study. The findings of the study are published in the journal Lancet Diabetes & Endocrinology.

Norbert Stefan from the German Center for Diabetes Research (DZD), the University Hospital of Tübingen and the Boston Children's Hospital, provides new information that a high amount of hip and leg fat mass is very important to retain metabolic health.

In addition, he discusses lifestyle modifications and pharmacological interventions that improve body fat distribution and exemplifies how a focus on lower body fat mass helps clinicians in risk assessment and patient communication.


An increased fat mass is an important risk factor for the worldwide increase in type 2 diabetes and CVD. However, for a given fat mass, there is a large variability in the risk of these cardiometabolic diseases. For example, some lean people unexpectedly have a risk of type 2 diabetes and CVD that is similar to the increased risk that is observed in most people who have obesity. What both of these phenotypes have in common is an increased upper body, and more specifically, an increased visceral (inside the belly), fat mass.

As a result, much focus has been given on the strong predictive power of upper body obesity. However, comparisons to rare diseases such as lipodystrophy (dramatic rarefication of fat mass under the skin) and studying genetically determining fat distribution in the general population, suggest that an impaired ability to expand fat in the lower part of the body is also very important for predicting the incidence of these diseases.

Norbert Stefan highlights mechanisms that result in the storage of energy in different fat depots of the body, or ectopically, in organs such as the liver, the pancreas, and the heart. Then he discusses studies showing to what extent measurement of fat in the lower part of the body is helpful to estimate the risk of type 2 diabetes and CVD.

In this respect, recently published landmark studies provided genetic support that a low amount of estimated visceral fat and a high amount of lower body fat may be equally important to retain cardiometabolic health. He then provides novel information from a magnetic resonance imaging study supporting this hypothesis.

The author then discusses mechanisms that may drive a dramatic re-distribution of fat from the lower to the upper part of the body during aging. In this respect, changes in sex hormone levels and signaling during lifetime are considered very important, both in men and in women. He also highlights strategies, related to changes in lifestyle, or pharmacological treatment in diseases associated with disproportionate fat distribution, such as nonalcoholic fatty liver disease or a lipodystrophy-like phenotype, that help to hinder such fat-redistribution. Finally, he exemplifies how the focus on lower body fat mass helps health care providers to communicate this risk with their patients.