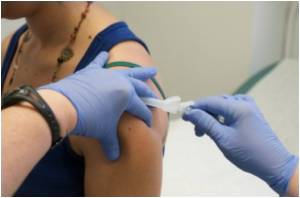 Whole-cell pertussis vaccines, also called DTwP, were available from the 1940s to 1990s, but were associated with safety concerns that ultimately led to the development of acellular pertussis vaccines, which are also called DTaP. By the late 1990s, the United States had switched from whole-cell to acellular vaccines for all five recommended infant and childhood doses.

The study, which followed the 2010-2011 pertussis outbreak in California, examined 10- to 17-year-olds who received the recommended four pertussis-containing vaccines. The researchers evaluated the risk of pertussis during the outbreak according to the number of whole-cell and/or acellular pertussis vaccines these participants had received as infants and toddlers.


Despite high levels of vaccine coverage, pertussis epidemics have arisen every three to five years since the 1980s, with progressively higher incidence rates over time. "Studies have suggested that protection following the acellular pertussis vaccine is less enduring than following the whole-cell pertussis vaccine," said lead author Nicola Klein, MD, PhD, co-director of the Kaiser Permanente Vaccine Study Center and a pediatrician. "Although reasons for the recurrent pertussis outbreaks are complex, waning protection following five doses of acellular pertussis vaccine plays a central role, at least in recent epidemics."
Advertisement
The study included 138 individuals with confirmed pertussis, 899 individuals who had a lab test indicating they did not have pertussis, and 54,339 individuals who were similar to those with confirmed pertussis on sex, race/ethnicity, medical clinic, and membership status.

Increased number of acellular doses from zero to four was significantly associated with an increasing percent of positive pertussis tests. On average, individuals had a 40 percent increased risk of pertussis for each additional acellular dose received (as compared to receipt of a DTwP dose) between ages 1-24 months.

Earlier studies by Kaiser Permanente have shown that protection from the fifth dose of acellular pertussis vaccine wanes substantially during the five years after vaccination among children 4 to 12 years of age who have only received the acellular vaccine. The current study included only individuals born in 1999 or earlier, for whom at least five years had passed since receipt of the fifth pertussis vaccine.

Since 2005, the Advisory Committee on Immunization Practices has recommended boosting with reduced antigen content acellular pertussis vaccine, also known as Tdap, for persons 11 years and older. The study found that a booster dose of Tdap did not overcome the advantage in protection from pertussis seen among those who had received four doses of the whole-cell vaccine.

"The results indicate that a booster dose of Tdap does not overcome the advantage in protection from pertussis afforded to those who previously received four doses of the whole-cell vaccine," Dr. Klein said. "Despite this, boosting the newly emerging cohort of acellular pertussis vaccine-only teenagers with Tdap remains the best means currently available to help protect this group against disease."

Studies demonstrate that whole-cell and acellular pertussis vaccines administered to infants trigger different immune responses that at least partially persist through the teenage years, but long-term clinical consequences of such differences have been unknown. The results of this study, the researchers said, suggest that variations in immune responses induced by primary immunization during infancy play a central role in protection from disease years later. Additionally, the study highlights the need for new pertussis vaccines that provide both an improved safety profile and long lasting immunity.

Engineered Spider Toxin Leads to New Generation of Anti-venom Vaccines
New engineered spider protein created from parts of a toxin from reaper or brown spiders can be a .....