WHO Urges Nations to Wipe Out TB by 2050 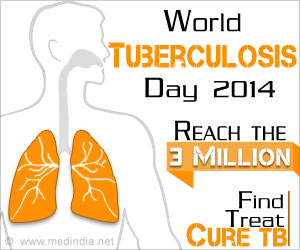 World Health Organization has urged over 30 countries -including some of the world's richest- to recognize the continued danger of tuberculosis (TB) and try to wipe it out by 2050.

Although TB is preventable and curable, a total of 155,000 people still fall ill with the disease every year in the 33 developed nations listed and 10,000 die, the WHO said.

The number of recorded new cases per year in the countries concerned -- ranging from Australia to France and Germany, and New Zealand to the United States -- is around 100 per million inhabitants.


Millions are also unknowingly infected with the TB bacillus, which can be spread by sneezing, and therefore risk falling ill at some point, the WHO underlined.

Patients with tuberculosis should eat a healthy diet so that they build up their immunity to fight against tuberculosis.
Advertisement
"If you talk to the general public of these countries, (they think) it is a disease of the past, that they don't have it anymore," said Marco Raviglione, head of the WHO's anti-TB programme.

All told, TB claimed 1.3 million lives worldwide last year, making it the deadliest disease after AIDS to be caused by a single infectious agent, according to WHO.

The 33 countries have been singled out precisely because they have relatively low levels of tuberculosis, notably compared with hotspots such as China, India and the former communist countries of Eastern Europe and Central Asia.

"We are at an historical point now in control of tuberculosis worldwide and there are number of countries, we count 33, that are really at the low level of incidence that allows them to truly target elimination," Raviglione told reporters.

"We want them as trailblazers, they are the ones that really have to show the world that we can do it," he said.

The WHO is putting a series of anti-TB measures on the table at an international conference in Rome this Friday and Saturday.

They include tackling infections among the most vulnerable groups, including the poor or homeless, migrants, and ethnic minorities.

People who use drugs or are in prison, and those with compromised immune systems -- including people living with HIV, malnutrition, diabetes, smokers and heavy drinkers -- all have a much greater risk of falling ill with TB.

Many of these vulnerable groups face barriers in accessing health services, the WHO said.

Raviglione said that "bold decisions" by governments could by 2035 pull TB rates down from the current 100 new cases per million per year to 10 per million.

"Therefore by 2050 we could really see the elimination of tuberculosis, which means less than one case per million people per year," he said.

The WHO also wants countries to ensure funding for high-quality TB services, improve screening for the disease, and boost the fight against drug-resistant forms of the infectious disease, which are seen as a huge emerging threat.

"Powerful antibiotics and better living standards have almost pushed the disease out of many high-income countries," said Professor Giovanni Battista Migliori of the European Respiratory Society.

"But we still have not succeeded. And if we do the wrong things now, TB could rebound, including with more drug-resistant forms," he warned, adding that "if we get it right, and recommit to fighting the disease, both at home and abroad, TB will eventually no longer be a public health threat."