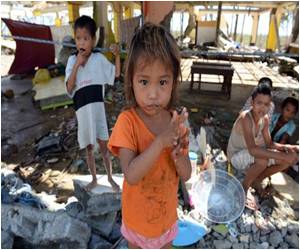 Many people who suffered serious injuries when a powerful typhoon ravaged the central Philippines have had to wait nearly a month for treatment, the World Health Organization said Tuesday.

"With some of the more remote areas now accessible, we're... seeing a second wave of people reaching hospitals with injuries," WHO's Philippines representative, Julie Hall, said in a statement nearly four weeks after the disaster.

Super Typhoon Haiyan destroyed some local hospitals, debris blocking access to many of those still working, when it slashed across the central islands on November 8, requiring the air evacuation of some of the injured to Manila and other cities.


The government's National Disaster Risk Reduction and Management Council now lists 26,233 people injured, which the WHO Western Pacific in Manila said were the same figures it is using.
Advertisement
The official figure had stood at just 12,500 in mid-November, a week after the typhoon swept out of the region.

"Hospitals in Manila and across the affected region are already treating around 20 people with spinal cord injuries, dozens with amputations and many more with serious fractures," Hall said.

WHO is working with the Philippine health ministry on the emergency health response, sending more than 60 foreign medical teams to storm-hit towns to revive medical services, as well as provide rehabilitation therapy and mental health assistance, Hall added.

Foreign governments and international aid organisations also put up field hospitals and other medical facilities in some of the worst-hit areas.

The Philippines is struck by about 20 typhoons and tropical storms each year, but Haiyan's 315-kilometre (195-mile) an hour winds and tsunami-like storm surges made it stand out for sheer ferocity.

Hall warned that disasters like Haiyan can create a new generation of people with disabilities when the injured do not always have timely access to medical and rehabilitation services.

The WHO is also concerned about the welfare of those already living with disabilities prior to the disaster, who are more vulnerable in emergencies, are less able to escape from hazards, and often lose essential medications or assistive devices, Hall said.

"Items like glasses, hearing aids and wheel chairs were swept away by the storm or left behind by people trying to flee," Hall said.

"One can only imagine the terror of being caught in a storm of this magnitude and not being able to run for cover or see a path to safety."

Rotator Cuff Injury
Rotator cuff injury can be a tendinitis, a strain, or a tear of the rotator cuff muscles. The ......