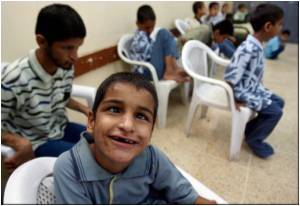 The World Health Organisation and Iraqi authorities are carrying out a survey of birth defects in Iraq following media reports of abnormal patterns in Fallujah, a WHO spokeswoman said on Tuesday.

"An investigation has begun in six governorates (administrative region) of Iraq into these reports of congenital defects," WHO spokeswoman Fadela Chaib told journalists.

The BBC reported in March that large and growing numbers of birth defects were observed by doctors in Fallujah, a former insurgent stronghold west of Baghdad that was at the heart of some of the fiercest fighting with US forces.


Chaib said the scientific "pilot assessment" by "the Iraqi government with the help of the... WHO" began in July and would take about 18 months to complete.
Advertisement
The study covers Sulemaniah, Diyala, Baghdad, Dhi-Qar, Basra and Anbar province, which includes Fallujah.

It will lay out "the magnitude, distribution and trends of Congenital Birth Defects" in Iraq and establish a basis for comparison with today as well as between different parts of the country, according to the UN health agency.

Reports of health abnormalities among civilians in Iraq or soldiers who served there have sparked claims of links with special weaponry allegedly used during successive wars, including armour-busting depleted uranium shells.

Officially the health study aims to provide "initial baseline information" for "a national prevention programme that would be used to guide interventions... on improving maternal and child health," according to the WHO.

Blood Pressure Calculator Post-Nasal Drip Vent Forte (Theophylline) Find a Doctor Pregnancy Confirmation Calculator Nutam (400mg) (Piracetam) Color Blindness Calculator Iron Intake Calculator Blood Donation - Recipients The Essence of Yoga
This site uses cookies to deliver our services.By using our site, you acknowledge that you have read and understand our Cookie Policy, Privacy Policy, and our Terms of Use  Ok, Got it. Close
×