The swine flu has escalated into the world's first influenza pandemic in 40 years, the World Health Organization declared, after infecting tens of thousands of people in 74 countries. 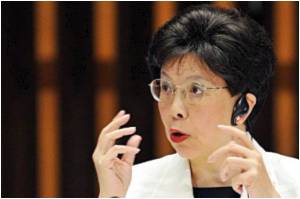 WHO Director General Margaret Chan said the declaration of a "moderate" pandemic should not spark panic and did not mean the death toll from A(H1N1), which currently stands at 144, would rise sharply.

The UN body said it was not recommending the closure of borders nor restrictions in movement of people, goods and services. But it warned the virus was spreading beyond the Americas where it was first detected in April.

"We will be raising our pandemic alert level to level six; and this means that the world is moving into the early days of its first influenza pandemic in the 21st century," Chan told reporters after a meeting of scientific experts.

"At this time, the global assessment is that we are seeing a moderate pandemic," she added.

The WHO raised its six-phase alert level to five at the end of April, indicating an imminent pandemic.

The latest WHO figures show that the number of reported A(H1N1) infections has reached 28,774 in 74 countries, including 144 deaths.

"Moving to pandemic phase six level does not imply we will see increase in number of deaths or very severe cases," said Chan.

"Quite on the contrary, many people having mild disease will recover without medicine in some cases, and it is good news, but the tendency to move into complacency is our biggest concern," she added.

Chan said the health agency is concerned that the virus is causing "very severe disease disproportionately" among people 30 to 50 years old.

WHO Assistant Director General Keiji Fukuda warned the pandemic could last up to two years.

"For a period for one to two years the virus is going around the world, and is getting people infected in a way a pandemic virus will get people infected... We need to be flexible how we respond to it," said Fukuda.

The declaration comes amid growing evidence that the virus, which originated in Mexico two months ago, is now being widely transmitted between humans in Asia and Europe as well as the Americas.

UN chief Ban Ki-moon said the announcement was not "a cause for alarm" as it reflected the geographical spread of the disease, but the world needed to be prepared.

"Though infectious, this new virus has so far not been as severe as had been feared and death rates have been low," the UN secretary general told a press conference at UN headquarters in New York.

Prime Minister Kevin Rudd said Australia had prepared well for the outbreak but he warned the population's mobility could cause problems. The country currently has 1,307 confirmed cases including four in intensive care.

EU officials promised measures on Thursday to reduce the impact of swine flu as Spain said 22 schools in the Madrid region had been hit by the virus.

The United States said it was well prepared to tackle the pandemic as it had been taking precautionary measures.

"We acted aggressively to stay ahead of the virus as it spread across the country. Now our challenge is to prepare for a possible return in the fall," Health Secretary Kathleen Sebelius said in a statement.

Hong Kong authorities Thursday ordered all primary schools in the city to be closed for two weeks after the first cluster of local swine flu cases was found in the Chinese territory.

In Germany, a school for Japanese youngsters in the western city of Duesseldorf was closed after 27 children tested positive for the virus. And in Australia, four swine flu victims were admitted to intensive care wards.

Following the announcement, the Red Cross and Red Crescent societies were mobilising to respond to the pandemic.

Chan said that it was up to individual countries to decide how to proceed given the outbreak was now classified as a pandemic.

Although no vaccine against A(H1N1) has yet to be produced, drug companies are looking to come up with one by the end of June or early July and last month sent three "seed viruses" to drug companies for use in making a vaccine.

Chan said the WHO would ask drug-makers to quickly prepare to produce swine flu vaccines once the production of seasonal flu shots ends in the next couple of weeks.

The last flu pandemic came after an outbreak of the H3N2 viral strain from 1968-69, which originated in Hong Kong, and went on to kill up to two million people.

World On the Verge of Swine Flu Pandemic: WHO

The World Health Organization warned Tuesday that the world was on the verge of an official swine flu pandemic, saying it was working to prepare countries for raising its alarm to the highest level.

Health officials around the world battled Friday to stop the spread of swine flu with schools in Europe closed, as global infections passed the 15,000-mark and more countries announced first cases.