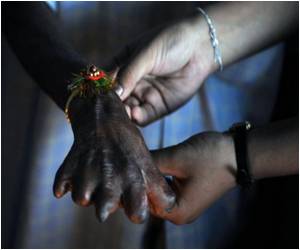 World Health Organisation's (WHO) Goodwill ambassador for leprosy Yohei Sasakawa has said that India is committed to curbing leprosy cases in the coming years and eliminating the stigma associated with the disease.

Sasakawa, on a seven-day visit to India, met senior officials from the ministry of health and family welfare to discuss the country's projects on leprosy.

"In a meeting with the health secretary, we discussed the twelfth five-year plan (2012-17) and work on leprosy. The country is committed to bringing down the number of cases at central, state and district level," Sasakawa told IANS.

"We exchanged our opinion on what we should be doing. I will also be meeting the Madhya Pradesh chief minister during my visit," the chairman of Nippon Foundation added.

While India achieved the WHO elimination level for leprosy of having less than 1 patient per 10,000 population in 2005, the country reported 1.27 lakh new cases last year.

According to the central leprosy division in the health ministry, Uttar Pradesh, Bihar, Maharashtra, West Bengal and Andhra Pradesh are among the worst-affected states.

India has over 60 percent of total leprosy cases across the world.

A major focus in curbing leprosy has been on eliminating the stigma and discrimination that comes with the disease. Sasakawa said the issue was also a concern voiced with the health ministry.

"We touched upon stigma and discrimination... Both, the states and the centre, have to work on this. I will continue my engagement with state and central level officials to ensure that leprosy is never low on priority," Sasakawa said.

Sasakawa also initiated a campaign after which the United Nations passed the resolution for elimination of discrimination against leprosy-affected people and their family.

India was among the 84 co-sponsors at the General Assembly when the resolution was adopted with principles and guidelines by the UN Dec 21, 2010.

Step Up the Fight Against Leprosy, Says WHO