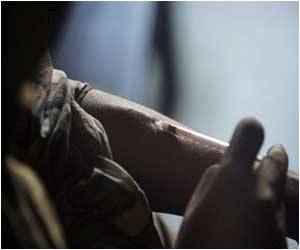 "I am deeply concerned about the distribution, sale and use of synthetic stimulants -- especially those that are marketed as legal substances," said Gil Kerlikowske, director of the White House's Office of National Drug Control Policy.

"At a time when drug use in America is increasing, the marketing and sale of these poisons as 'bath salts' is both unacceptable and dangerous."


Sold legally under names such as Ivory Wave, Purple Wave and Vanilla Sky, the powdery substances contain synthetic stimulants including MDPV (3,4-methylenedioxypyrovalerone) and mephedrone -- drugs known to produce euphoric and aphrodisiac effects, as well as increased alertness, in users.

A new drug called Mephedrone or MM-Cat, which is said to be a cross between cocaine and ecstasy, is being sold through the web, it has emerged.
Advertisement
"Abuse of these unlicensed and unregulated drugs is growing across the country," said Kerlikowske, who pointed to dramatic increases in emergency calls to poison control centers across the country in the past year.

He said 251 phone calls related to "bath salts" had been made to the centers this year alone, already higher than the 236 calls for all of 2010.

Websites selling Ivory Wave state the product is "not for human consumption," but users posting on online drug blogs have written of snorting the drug to achieve a "legal high" similar to that of cocaine.

Several states, including Hawaii, Louisiana and Michigan, have introduced legislation to have the products banned. They are for sale online and at stores in several states, according to various reports.

In April, the United Nations Office on Drugs and Crime described mephedrone as "a synthetic drug often touted as a legal alternative to amphetamine or cocaine," and said its use had become widespread in Europe, North America and Australia, with reports of related deaths.

UNODC noted that because of "chemical differences, there are often no legislative restrictions on (the drugs') manufacture and distribution."

New 'designer Drugs' Might Be Developed to Combat Avian Flu

Scientists at San Diego claim to have developed two dozen novel compounds from which new designer drugs might be developed to combat Avian flu.
Advertisement
<< South Koreans Beating the World in Workaholism
Parkinson's Disease Research may Result in New Drugs >>