When Adopted by Gay, Lesbian or Heterosexual Parents Foster Kids Do Equally Well 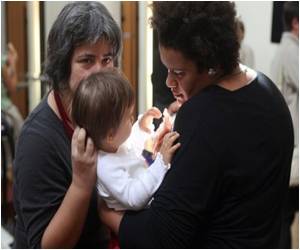 UCLA psychologists report that high-risk children adopted from foster care do equally well when placed with gay, lesbian or heterosexual parents. This report was made at the end of the first multi-year study of children adopted by these three groups of parents.


The psychologists studied the children two months, one year and two years after they were placed with a family. The children underwent a cognitive assessment by a clinical psychologist three times during the course of the study, and the parents completed standard questionnaires about the children's behavior at each of the three assessment periods.

Foster Kids Over Medicated With Antidepressants

Foster children in US receive psychotropic drugs at a higher rate than other children covered by the government insurance program.

The psychologists found very few differences among the children at any of the assessments over the two-year period following placement. On average, children in heterosexual, gay and lesbian households achieved significant gains in their cognitive development, and their levels of behavior problems remained stable. Their IQ scores increased by an average of 10 points, from about 85 to 95  a large increase, from low-average to average functioning.

"The children showed meaningful gains in heterosexual, gay and lesbian families," said Justin Lavner, a UCLA doctoral candidate in psychology and lead author of the study. "Their cognitive development improved substantially, while their behavior problems and social development were stable."

The study is published in the October issue of the American Journal of Orthopsychiatry.

The children had multiple risk factors at the time of adoption, including premature birth, prenatal substance exposure, abuse or neglect, and multiple prior placements. The psychologists acquired information regarding these biological and environmental risk factors from birth records, court reports and Los Angeles County Department of Children and Family Services records.

"The children adopted by gay and lesbian parents had more challenges before they were adopted and yet they end up in the same place, which is impressive," said Letitia Anne Peplau, a distinguished research professor of psychology at UCLA and co-author of the study.

At a time when tens of thousands of foster children lack stable homes and concerns about the suitability of gay and lesbian adoptive parents limit the pool of potential parents, the study indicates that gay and lesbian parents can provide nurturing homes for these children in a manner similar to that of heterosexual parents.

"There is no scientific basis to discriminate against gay and lesbian parents," Peplau said.

Asked whether children need a mother and father, senior author Jill Waterman, a UCLA adjunct professor of psychology, said, "Children need people who love them, regardless of the gender of their parents."

Waterman expressed gratitude to Susan Edelstein, executive director of UCLA TIES for Families, and the Adoptions Division of the Los Angeles County Department of Children and Family Services for their support of this project.

More than 100,000 children in foster care in the United States are awaiting adoption, said Lavner, who has a graduate research fellowship from the National Science Foundation. Adoption policies toward gay men and lesbians vary among the states. Every state allows single gay and lesbian parents to adopt, but not all states allow same-sex couples to adopt; California does.

Iran's president says that supporting homosexuality is the stuff of hardline capitalists who do not care about real human values.
<< Optimal Treatment Duration for MRSA-related Pneumonia: Stud...
Coping With Stress: Expert Suggestions >>

Find a Doctor Selfie Addiction Calculator Sinopril (2mg) (Lacidipine) Sanatogen Indian Medical Journals Find a Hospital Blood - Sugar Chart Post-Nasal Drip Accident and Trauma Care Daily Calorie Requirements
This site uses cookies to deliver our services. By using our site, you acknowledge that you have read and understand our Cookie Policy, Privacy Policy, and our Terms of Use