You want more fries with that, Mr. Kim? How about a hotdog, Miss Park?

Once condemned as evil "US imperialist" fare, western-style fast food is now available in North Korea thanks to a Singaporean entrepreneur who is already drawing up expansion plans just months after opening his first outlet. 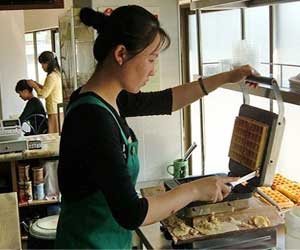 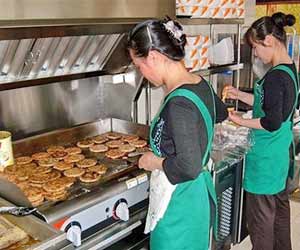 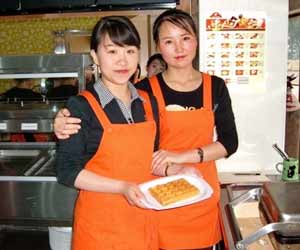 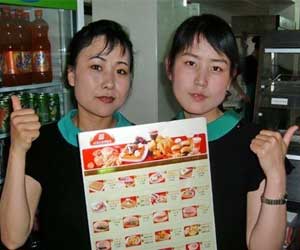 The first branch of Samtaesong ("Three Big Stars"), as Waffletown is known in North Korea, started operating in May

"There is a potential to develop this business over there," said Patrick Soh, who is bullish on the prospects of fast food in the isolated Stalinist state better known for famines than deep-fried delights.


Soh, 56, holds the franchise in several Asian countries for Waffletown USA, a relatively obscure brand in the region compared to the likes of McDonald's, KFC, Pizza Hut and Burger King, but he has big ambitions.
Advertisement
The first branch of Samtaesong ("three big stars"), as Waffletown is known in North Korea, started operating in May after Soh's company got the first license awarded to a foreign fast food outlet.

Burgers, called "minced beef and bread" to mask their American association, are the biggest attraction at the eatery, which also sells fries, crispy Belgian waffles, fried chicken and -- the latest addition -- hotdogs.

"It is not only the locals who enjoy the food. Even the foreigners like the food," Soh told AFP in an interview at a Singapore outlet of Waffletown.

Soh will make his fourth trip to Pyongyang this month to explore the feasibility of opening a second outlet there.

If all goes smoothly, it should be up and running in early 2010, said Soh, who is not deterred by problems like power outages and the unavailability of some items in Pyongyang.

His North Korean adventure started when he was approached last year by a Singaporean investor, who broached the idea of setting up a Waffletown franchise in Pyongyang.

Soh declined to name the investor or say how much it cost to open the Pyongyang eatery, saying his main role was to set up the operation and train local staff to run Samtaesong.

A North Korean delegation paid a visit to Singapore early this year to sample the fare at a Waffletown outlet.

"They came and tried the food and liked the waffle, burgers and fried chicken," Soh said over coffee at the outlet, located in an upmarket neighborhood near Singapore's Orchard Road shopping belt.

"They find that we have a bit more variety than other typical burger chains and that we don't sell junk food," he said.

Soh made his first trip to Pyongyang in November last year, taking four days to survey the site and see whether the fast food concept was workable in one of the world's few remaining communist states.

He was pleased to learn that the site was in a choice location in downtown Pyongyang, right next to a subway station and within walking distance of various universities.

He went back to Pyongyang in December to begin preparatory work for the opening of the eatery, from arranging the layout of the restaurant to listing the kitchen equipment and ingredients that needed to brought in.

The seasoning for the chicken and the waffle mix are among items imported from Singapore but other ingredients like beef and the chicken itself are sourced locally, with suppliers using his recipes for the burger buns and patties, Soh said.

The eatery buys soft drinks from shops that cater to the diplomatic community and resells the beverages in paper cups.

"I don't need to spend much time to train them. I take about two, three days and they have a grasp of the work."

Since Samtaesong opened its doors in May, customers, including foreign students from China and Russia, have been streaming into the 246-square-metre (2,647 square foot) outlet, he said.

"The locals come in and know the food that they want to order," said Soh.

Prices are set in euros, but US dollars are accepted as payment.

The most expensive item on the menu is the crispy fried chicken at slightly under three euros.

The communist state's per capita income was estimated at just over 1,000 dollars in 2008, but this is not denting Soh's drive to open more Samtaesong outlets in the country.

He thinks North Koreans enjoy the novelty of the food and environment in his restaurant.

"This is new for them. It's just like when McDonald's first opened in Singapore."

Fast Food Fad: A Global Mania
Fast food, like fast life, will put us on the fast track to ill health. Teaching young children to ....

Fighting Obesity While Sticking to Fast Food  Is It Possible?
Eating fast food is no longer a fashion. It is now a necessity. But fast-food is also known to ......

Salt Content in Fast Food Unacceptably High in Australia
The salt content in such popular fast foods as KFC chicken and Hungry Jack's burgers is ......