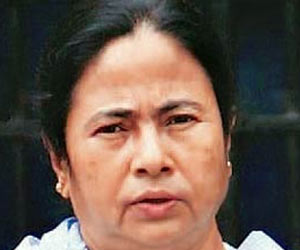 Banerjee was taken to the Belle Vue Clinic shortly after she landed in the city from Delhi Wednesday, with complaint of breathing problems, palpitation and body pain.

The doctor, part of the medical team formed for Banerjee's treatment, said: "She is a bit nauseous because of the analgesics (pain-killers) she is taking for the back and knee pain. She vomitted last night, but her condition is improving."


According to the doctor, her discharge date has not yet been decided.

"She still has pain in her back and left knee, which is affecting her movements. She is having difficulty while getting off her bed," the doctor said, adding: "She just had a cup of tea and biscuits this morning. We haven't yet decided when to discharge her, let us see."
Advertisement
Earlier Friday, Banerjee underwent ECG tests.

Banerjee and her Finance Minister Amit Mitra were Tuesday heckled by activists of the Students Federation of India, the students wing of the Communist Party of India-Marxist, when she went to the Planning Commission office in Delhi for a meeting.

In Delhi Wednesday morning, Banerjee said she had been on oxygen throughout Tuesday night.