Weight lost might frequently return to haunt the dieter, but he or she should not be discouraged. Long-term healthy dietary interventions do yield dividends, points out a Ben-Gurion University researcher.

The study led by Health Sciences Prof. Assaf Rudich identified two distinct biomarker patterns that correspond to weight change, one of which continues to improve with time.


The study was conducted among 322 participants during the two-year Dietary Intervention Randomized Controlled Trial (DIRECT) performed by Ben-Gurion University of the Negev at the Nuclear Research Center Negev, Israel (New England Journal of Medicine). The population was randomized to three different, but healthy interventions: low-fat, Mediterranean or low-carbohydrate diets, and unprecedented adherence rates were maintained throughout the entire two-year period.


According to Assaf Rudich, "This study tells us that we may all have tunnel vision on weight when it comes to healthy dieting. Although maintaining ideal body weight is linked to better health, when it comes to adopting healthier dietary habits in mild to moderately obese people, there are benefits beyond weight loss, such as decreasing inflammatory tone and elevating the 'good cholesterol' HDL."

Rudich explains that switching to healthier dieting extends benefits beyond the single outcome of weight loss. In fact, important improvements that likely signify decreased risk for cardiovascular disease occur even despite weight regain, as long as dieting continues.

"Pattern-A" includes biomarkers [insulin, triglycerides, leptin, chemerin, monocyte-chemotactic-protein-1(MCP-1), and retinol-binding-protein-4(RBP4)] whose dynamics tightly corresponded to changes in body weight. They significantly improved during the first six months of the "rapid weight loss phase." Then, unfortunately, they significantly trended in the opposite direction once participants started to regain weight during months 7-24 (the "weight maintenance/regain phase").

"Pattern B" that includes high-molecular-weight (HMW) [adiponectin, HDL-cholesterol, high-sensitive C-reactive protein (hsCRP), fetuin-A, progranulin, and vaspin], which displayed a continued, cumulative improvement throughout the intervention, despite the partial weight regain observed during months 7-24 of continued dieting, a totally different pattern of biomarkers.

These patterns were similar, although of different magnitude, across the low-carb, Mediterranean and low-fat diets.

Along the same line of continued benefit of adopting healthier dietary habits, the research team published an article last year in Circulation (a journal of the American Heart Association) that participants in DIRECT showed regression of the atherosclerotic plaque in their carotid artery, a process underlying a large percentage of the cases of stroke. Regression of atherosclerosis was previously only demonstrated with medications or with rather extreme dietary regimens.

According to Prof. Iris Shai, principal investigator of DIRECT, these findings contain a strong message for the public. A researcher at BGU's S. Daniel Abraham International Center for Health and Nutrition in the Department of Epidemiology, Shai says that, "Switching to a healthy lifestyle is a long-term strategy that should be done moderately but persistently. There are no magic shortcuts," she says.

"There is no doubt that moderate weight loss is an important goal for specific populations, and losing weight will indeed improve several markers that are rather tightly related to fat mass, such as triglycerides, insulin and leptin. These, however, will tend to change similarly to weight dynamics.

"Yet, it is encouraging that adhering to a healthy diet per-se will continue to improve other blood biomarkers, some of which quite strongly associate with improved cardio-metabolic health, likely because they reflect adipose tissue and other organ function, such as HDL-c, adiponectin and CRP. Such markers may signify long-term effects of the initial weight loss, or, maybe even more promisingly, reveal to us the capacity of healthier dietary habits to reverse obesity-associated adipose tissue and liver dysfunction." 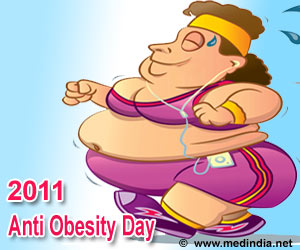 Anti Obesity Day 2011 - Time to Get into Shape
November 26th, 2011 is dedicated as Anti-Obesity Day in India. The anti-obesity initiatives for 2011, hover around creating awareness about obesity, its health risks and the best ways to manage weight
READ MORE