Weight Loss Drug Has Killed At Least 1,300 in France 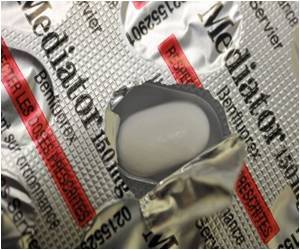 Benfluorex, commonly known as Mediator, a diabetes drug that was widely prescribed as a slimming aid, has been responsible for thousands of hospitalizations and deaths in France before it was withdrawn.

Mahmoud Zureik of the National Institute of Health and Medical Research (Inserm), who co-led the probe, told AFP that around 3,100 people had required hospitalisation during the 33 years during which the drug was sold.

However, these figures could well be an "underestimate," he said.


The study, appearing in the specialised journal Pharmacoepidemiology & Drug Safety, finetunes an estimate by Zureik in 2010 that the death toll from the scandal was between 1,000 and 2,000.
Advertisement
Mediator, known by its lab name as benfluorex, was initially licensed to reduce levels of fatty proteins called lipids, with the claim that it helped diabetics control their level of blood sugar.

But it also suppressed appetite, which meant it gained a secondary official use to help obese diabetics lose weight.

In fact, it was widely sold on prescription for non-diabetics wanting to slim.

In 2009, Mediator was pulled from the European market amid evidence that it damaged heart valves and caused pulmonary hypertension.

Its French manufacturer, Servier, is being probed on suspicion of dishonest practices and deception.

The new study is an extrapolation based on figures for deaths from faulty heart valves, although not from hypertension, among major users of the drug.

According to Mediator, 145 million packets of Mediator were sold on the French market before the drug was pulled.

The Mediator case came to light after a scandal involving a similar type of anti-obesity drug, fenfluramine, in the late 1990s.

Adverse Drug Reaction and Toxicity Finder
Drugs can cause side effects and toxic reactions. These reactions can be very characteristic for ....

Weight Loss Pills
A number of weight loss products are available. Some products may be ineffective or they could ......