Newly developed highly sensitive, wearable gas sensor can monitor environmental and human health effectively, reports a new study. The findings of the study are published in the Journal of Materials Chemistry A. 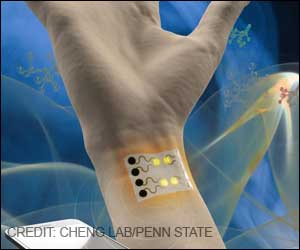 A highly sensitive, wearable gas sensor for environmental and human health monitoring may soon become commercially available, according to researchers at Penn State and Northeastern University.


‘Newly designed wearable gas sensor can monitor environmental and human health. The sensor device is unique and highly sensitive from other wearable sensors, as it uses a self-heating mechanism that enhances sensitivity.’

The sensor device is an improvement on existing wearable sensors because it uses a self-heating mechanism that enhances sensitivity. It allows for quick recovery and reuse of the device. Other devises of this type require an external heater. In addition, other wearable sensors require an expensive and time-consuming lithography process under cleanroom conditions.

Hand and arm showing sensor applied to inner write with moble phone sized read beside it.

"People like to use nanomaterials for sensing because their large surface-to-volume ratio makes them highly sensitive," said Huanyu Cheng, assistant professor of engineering science and mechanics and materials science and engineering, Penn State.

"The problem is the nanomaterial is not something we can easily hook up to with wires to receive the signal, necessitating the need for something called interdigitated electrodes, which are like the digits on your hand."

Cheng and his team use a laser to pattern a highly porous single line of nanomaterial similar to graphene for sensors that detect gas, biomolecules, and in the future, chemicals. In the non-sensing portion of the device platform, the team creates a series of serpentine lines that they coat with silver. When they apply an electrical current to the silver, the gas sensing region will locally heat up due to significantly larger electrical resistance, eliminating the need for a separate heater. The serpentine lines allow the device to stretch, like springs, to adjust to the flexing of the body for wearable sensors.

The nanomaterials used in this work are reduced graphene oxide and molybdenum disulfide, or a combination of the two; or a metal oxide composite consisting of a core of zinc oxide and a shell of copper oxide, representing the two classes of widely used gas sensor materials -- low-dimensional and metal oxide nanomaterials.

"Using a CO2 laser, often found in machine shops, we can easily make multiple sensors on our platform," Cheng said. "We plan to have tens to a hundred sensors, each selective to a different molecule, like an electronic nose, to decode multiple components in a complex mixture."

The U.S. Defense Threat Reduction Agency is interested in this wearable sensor to detect chemical and biological agents that could damage the nerves or lungs, according to the researchers. A medical device company is also working with the team to scale up production for patient health monitoring, including gaseous biomarker detection from the human body and environmental detection of pollutants that can affect the lungs.

Ning Yi, a doctoral student in Chen's lab and co-lead author of the paper posted online in the Journal of Materials Chemistry A, said, "In this paper, we showed that we could detect nitrogen dioxide, which is produced by vehicle emissions. We can also detect sulfur dioxide, which, together with nitrogen dioxide, causes acid rain. All these gases can be an issue in industrial safety."

The research team said their next step is to create high-density arrays and try some ideas to improve the signal and make the sensors more selective. This may involve using machine learning to identify the distinct signals of individual molecules on the platform.

New Skin-Hugging Sensor can Track Your Health in Real-time

New skin-hugging sensor developed to monitor health. This new wearable wireless sensor that sticks to the skin uses a new type of radiofrequency identification (RFID) to beam signals to receivers clipped to clothing.

The suit is linked to a cellphone, a computer, or even to a doctor's computer through wireless transmission and helps in mobile health monitoring.