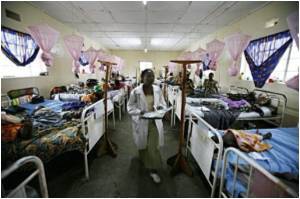 Understanding the relationship between language and health care quality has important public health implications for providing services in an increasingly diverse U.S. population, according to Hector M. González, Ph.D., assistant professor of family medicine and public health at WSU's Institute of Gerontology and School of Medicine. "So often we see that health care providers and researchers blame patients not fluent in English for not adhering to medical prescriptions and treatments when the problem may be that patients simply don't understand the clinician," González said. "Today, there are over 60 million Americans who speak languages other than English and that will rapidly grow in coming years. That's a big market that savvy health care providers should not ignore," he said. The study, led by González, appears in the Journal of the American Board of Family Medicine.

With a health insurance policy you and your family can rest assured!
Advertisement

With Latinos expected to comprise more than a third of the U.S. population in the coming decades, practitioners and medical schools need to think about how they want to best serve this changing patient population.


Eliminating disparities in health care is a major priority in the United States, and the Agency for HealthCare Research and Quality has emphasized the importance of removing language barriers to shrink such disparities. "We have the most sophisticated health care system in the world, however, it does little good if patients and providers fail to communicate," González said. "There may be low-tech, perhaps even low-cost ways to improve health care quality that should not be overlooked as health care is transformed to meet the coming health care needs of the nation."

The concept of social health insurance is deeply ingrained in the fabric of healthcare systems across the European continent.
Advertisement
<< Study Sheds Light on A Novel Function of Anti-Diuretic Horm...
Senses Influence the Brain's Clock >>

Accident and Trauma Care Drug Interaction Checker Calculate Ideal Weight for Infants Blood Donation - Recipients Blood - Sugar Chart Blood Pressure Calculator The Essence of Yoga Find a Hospital Loram (2 mg) (Lorazepam) Hearing Loss Calculator
This site uses cookies to deliver our services.By using our site, you acknowledge that you have read and understand our Cookie Policy, Privacy Policy, and our Terms of Use  Ok, Got it. Close
×