Water and Sanitation Recognized by UN As Basic Human Right 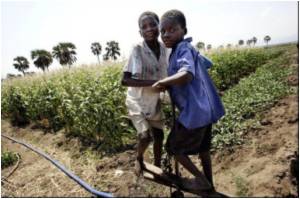 Access to clean water and sanitation has been declared a basic human right by the United Nations (UN).

Researchers Demand That Water Be Considered A "Basic Human Right"

Researchers, in a recent article in the journal PLoS Medicine Editorial, have argued that despite recent international objections, access to clean water should be recognized as a human right.
Advertisement

The text "declares the right to safe and clean drinking water and sanitation as a human right that is essential for the full enjoyment of the right to life".


The resolution laments the fact that 884 million people lack access to safe drinking water and that more 2.6 billion do not have access to basic sanitation.

Asian countries, a study states, need to pay more attention to providing care for the dying, in view of the fact that living standards have improved a lot in the region.
Advertisement
It also notes that roughly two million people die every year from diseases caused by unsafe water and sanitation, most of which were children.

Talking about the move, Maude Barlow, a Canadian water activist, said: "This is a historic day for the world, a big step in the right direction toward the distant goal of a water treaty."

"It is going to mean a huge amount to our movement around the world, to local community groups fighting for water rights, water justice against governments, corporations which are not respecting their rights," Barlow added.

As delegates and local residents prepared for the HIV and Human Rights March through the streets of Vienna this evening, the call for human rights protection grew
Advertisement
Advertisement