Watching TV During Pregnancy may Lead to Obesity in Kids: Study 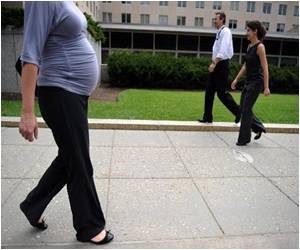 According to the study, turning the TV off during mealtimes to help prevent childhood obesity may need to start even before a child is born.

The study found that TV watching during meals is discouraged because it is associated with poorer quality diet, and mothers pay less attention to whether their children are full.


Lead author Mary Jo Messito, said that reinforcing healthy media habits during pregnancy may help reduce infants' mealtime media exposure and impact long-term media habits in children and reduction of mealtime TV viewing during pregnancy could be an important component in early childhood obesity prevention programs.
Advertisement
The findings showed that 71 percent of pregnant women reported at least some mealtime TV watching, and 33 percent of the mothers reported that their 3-month-olds were exposed to the TV during feeding.

It was also found that women who watched TV during meals while pregnant were five times more likely to expose their infants to TV during feeding than women who did not watch TV while eating during pregnancy and mothers who were younger than age 25 and those who did not exclusively breastfeed also were more likely to expose their infant to TV while feeding them.

Early Signs of Pregnancy
Pregnant or not pregnant? Catch on to the early pregnancy signs and symptoms and replace suspense .....

Increased Television Viewing Linked to Shorter Sleep Duration in Young Children
A study has found a small but consistent association between increased television viewing and ......