Watching Re-runs of Old TV Shows can Increase Your Self Control: Study 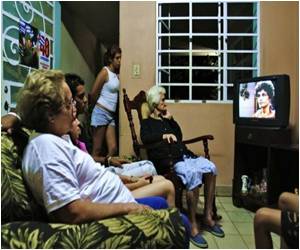 Watching re-runs of old television shows can be good for your health, reveals study.

Psychologists have long believed that people who have limited amounts of impulse control are more likely to give in to temptation later.

Media reports indicate that Indian regulators have ordered television channels not to broadcast reality shows before 11:00 pm over fears about their increasingly adult content.
Advertisement

In order to stop this from happening and to restore a sense of self-control, we need to boost ourselves and be in a good mood, which is where re-watching your favourite TV shows works.


According to psychologists, we think of these characters as friends or family.

In the study conducted by researchers from the University of Buffalo, the results showed that people found it easier to maintain their self-control if they had also been asked to describe a favourite television show during experiments.

A new study has revealed that some of the traits, such as self-control, sociability and decision making, may be greatly influenced by genes.
Advertisement
The participants took part in essay writing and word association experiments.

In her article Derrick said that while watching TV is not the optimal way to boost your mood as physical exercise and reading can have the same effect, it should not be dismissed.

She concluded that media use can have unexpected psychological benefits.

"Television, movies and books can be more than leisure activities; in some cases, they fulfil needs, like restoring self-control, that people are reluctant or unable to fulfil through other means," the Daily Mail quoted her as saying.

The study has been published in Social Psychological and Personality Science.

Three colleagues put together the final edit of television shows in a small studio in the Norwegian city of Bergen. Nothing extraordinary, had it not been that all of them are deaf.
Advertisement
<< New Recommendations on Hepatitis C Screening Published
After Ramadan Fast, Indonesians 'Eat With a Vengeance', Say... >>

New research says that most of the parents believe that media ratings guide them in taking decisions about what type of content they allow their children to be exposed to.
Advertisement
News A-Z
A B C D E F G H I J K L M N O P Q R S T U V W X Y Z
What's New on Medindia